Parents of children at creches in RTÉ documentary to seek compensation 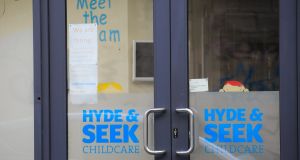 A legal firm says it has been instructed by more than 30 families to seek compensation on behalf of children in Hyde and Seek creches which featured in an RTÉ Investigates programme last week.

Ms Coleman said the legal firm held a meeting with parents whose children are enrolled in Hyde and Seek creches on Thursday night where they were briefed on issues relating to the documentary and their legal options.

“The mood among parents was a mixture of anger and sorrow,” she said. “It was a very emotional time for many of them.”

She said the firm has been officially instructed to act on behalf of more than 30 families, while it was in contact with dozens more.

Parents of children at Hyde and Seek have had a number of meetings with management over the past week or so to discuss the fallout from the RTÉ programme.

The documentary detailed disturbing behaviour and practices including breaches of fire safety and rough handling of children.

While many parents have expressed anger over the contents of the documentary and the actions of management, some have praised front-line staff in the creches.

Coleman Legal Partners was also involved in representing the parents of 22 children following allegations of mistreatment at Links Creche and Montessori Ltd, another creche firm, following a separate RTÉ Investigates documentary aired in 2013.

Two years ago the High Court approved settlements totalling more than €1 million in cases arising out of the programme which included allegations of disturbing behaviour and practices. The settlements involving Links Creche and Montessori Ltd were without admission of liability.

In the case of the legal action against Links Creche and Montessori Ltd, the parents of 22 children ended up suing the firm and the creche owners, Deirdre and Padraig Kelly, from Malahide Co Dublin, over alleged mistreatment.

In that case, the defendants filed a full defence and denied the incidents recorded in the footage were representative of the level of care throughout the creche.

Since the RTÉ documentary, the firms have expanded and the combined cash pile at the creches is almost €1.9 million.

Meanwhile, Tusla, the Child and Family Agency, has stood by its decision not to provide any further information about a group of 37 crèecheswhich were found to have “critical” risks.

It emerged this week that Tusla maintains a risk register on which 37 creches are listed as having serious issues with potential regulatory non-compliance.

Fianna Fáil has said affected parents should be told what the issues are in the facilities in question.

Tusla said on Thursday that the services, which are being inspected or undergoing enforcement action, have “a right to fair procedures, which can be highly litigious”.

The Minister for Children Katherine Zappone has asked Tusla to update her on the status of these facilities.