Over 22,000 set to make festival journey to country estate in Portlaw this Friday evening 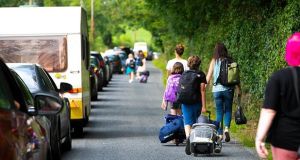 PARTY LINE: Festivalgoers walk to All Together Now festival at Curraghmore, Co Waterford, amid hours of traffic delays in getting to the venue. Photograph: Patrick Browne

People travelling to All Together Now festival in Co Waterford have been warned to expect long traffic delays.

More than 22,000 people are set to attend the festival set in a Curraghmore country estate in Portlaw, Co Waterford, on Friday evening.

AA Roadwatch said there are “extremely long delays” heading into the festival.

“The heaviest volumes are on the blue access route, heading from the Kilmeaden Road (R680) on to the Dungarvan Road (R676) and down to the turn-off for the gate. As result, traffic has backed up into Carrick-on-Suir town centre too.”

“If you’re travelling in the area but not attending the festival, consider alternative routes. If you are travelling to the event, expect long delays and follow Garda directions – bear in mind there’s no access to the site via Portlaw Village,” it said.

Are we there yet? Too right we are!

On social media, drivers are complaining of queues of an hour or longer to get into the car parks.

Robyn Kilroy from Dublin who is attending the festival said she and her friends have been stuck in traffic for three hours.

“Some people on our bus have decided to try walking rather than wait in traffic, which is another hour-and-a-half,” she said.

Kate Gunn said she left Co Wicklow at midday and was still stuck in traffic on the way to the festival at 7:30pm.

“Left wicklow at 12.15, still stuck in traffic. People abandoning cars and walking, including whole families with young kids. No food, toilets, water, shops. It’s like armageddon. Locals are absolute heroes though,” she tweeted.

Gardaí have cautioned motorists to follow the route to the gates advised on their tickets and not turn off the main routes as traffic is also heavy on the back roads.