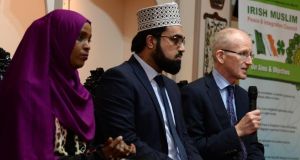 A fatwa against female genital mutilation (FGM) “in all its forms” has been issued by Shaykh Dr Umar Al-Qadri, head imam of the Islamic Centre of Ireland at Blanchardstown in west Dublin, making it “religiously impermissible (haram) and sinful.”

The fatwa calls “on all Muslims to speak against this practice, stop it if they are aware of its occurrence, and report any knowledge of it to the authorities”.

A fatwa, Shaykh Al-Qadri explained, “is a religious opinion by an Islamic scholar” and its effect depends on “the influence of the religious scholar or the institute that he is affiliated to.”

The fatwa “doesn’t have a binding force on anyone,” he said, “it is a religious opinion.”

Ifrah Ahmed, who was subjected to FGM at the age of eight, said that for her it was “very important to have the support of religious leaders”.

She is the driving force behind the Ifrah Foundation, which aims to have FGM banned around the world by 2030. Consultant obstetrician and gynaecologist Prof Chris Fitzpatrick, who is also an Ifrah Foundation board member, said: “Religious leaders have a moral responsibility to actually make very strong pronouncements” in relation to FGM.

Looking towards the World Meeting of Families in Dublin later this year, he said: “We think that perhaps Pope Francis coming here in August may be an opportune moment to make a statement, particularly as it happens within the context of families and that there would be global stage to make a pronouncement such as that.”

FGM “is not specifically an Islamic issue”, he said. “In a country such as Nigeria there are many Christians women, many Catholic women who have FGM,” he said.

All three were speaking at a press conference in the Al-Mustafa Islamic Centre in Blanchardstown. A notification for the press conference condemned “the recent comments of [Islamic Cultural Centre of Ireland spokesman] Dr Ali Selim” on FGM.

Speaking to The Irish Times, Dr Selim described FGM as barbaric, but said that where a doctor recommended female circumcision should take place, then it should. He spoke of the fallout since he said this on RTÉ’s Prime Time as down to “a crisis of interpretation”.

Dr Fitzpatrick said at the press conference that “the term ‘circumcision’ is not recognised as an appropriate medical term in this context at all. The term is female genital mutilation and that comprises all types of surgical interference, partial and complete removal of the external female genitalia.” There was “no justification for them whatsoever and there is no medical justification.”

Shaykh Al-Qadri called for Dr Selim’s “resignation as spokesperson for the Clonskeagh mosque and as a lecturer at TCD”.

Not for the first time Dr Selim had “put the [Muslim] community in a very embarrassing situation,” he said.

Ifrah Ahmed said she had been lobbying religious leaders in Somalia to get a fatwa on FGM “and came back here where this Muslim scholar was on national TV saying it was okay to practice FGM, which made me really upset. He said it should be practised, but indirectly.”

She was “not in a position to say Ali Selim does not represent the Muslim community but today here in the mosque are those people who are,” she said.

Condemning Dr Selim’s comments, Amnesty International said his views “regrettable and dangerous approval of a brutal practice that had blighted the lives and health of millions of girls and women around the world”.

In a brief statement on Monday, Trinity College Dublin said it “utterly condemns female genital mutilation in all circumstances”. It noted that Dr Selim was employed there on an hourly basis to teach Arabic.