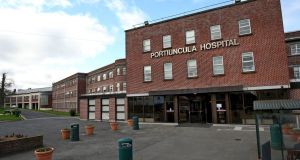 A family, including six children, was brought by gardaí to sleep at a Co Galway hospital last week as they were unable to access emergency accommodation, it has been confirmed.

The Romanian family, comprising six children and six adults, presented at Athlone Garda station on the night of September 5th with nowhere to sleep.

A Garda spokesman said the family had presented at the station at about 10.30pm.

“Following consultation with Tusla and due to the fact that there were no suitable facilities in the Garda station the family were brought to Portiuncula Hospital in Ballinasloe. ”

A spokeswoman for Tusla said the agency could not comment on an individual family’s case. However, she said: “Generally where a family reports at a Garda station as homeless and An Garda Síochána contact the emergency out-of-hours service, an on-call social worker will provide information and advice.

“In situations such as these where the children are being looked after by [a] parent or guardian and there is no immediate risk to a child, services including Tusla would endeavour to assist in finding local accommodation for the children, and family. If no such accommodation is available, and it is not suitable for the children to remain in the Garda station, there may be occasions where a family would spend the night in a hospital.

“Whilst accommodation is not in the remit of Tusla, and this would be dealt with separately the following day by the relevant authorities, the local social work department would follow up in relation to the children involved and would screen and assess any referral in line with Children First.”

A spokeswoman for the Saolta hospital group, which manages Portiuncula Hospital, would not comment on the case.