Pontiff announces summit on the protection of minors amid continuing crisis 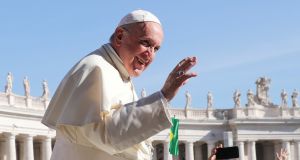 Pope Francis has summoned senior Catholic bishops from across the world to the Vatican to discuss the protection of minors, in his latest attempt to get to grips with the Church’s child sex abuse crisis.

The heads of the national Catholic bishops’ conferences will meet with Francis from February 21st-24th, a Vatican spokeswoman said.

The announcement came at the end of a three-day meeting of the “C-9”, a group of nine cardinals from across the world which meets about four times a year to advise the pope.

The spokeswoman said the sex abuse crisis was a main topic at the meeting, which six of the group’s members attended.

The Catholic Church is facing sex abuse scandals in the US, Chile, Australia and Germany, among other places.

Der Spiegel magazine reported on Wednesday that a study commissioned by the German Bishops’ Conference had revealed that 1,670 clerics and priests had sexually abused 3,677 minors, mostly males, in Germany over a 70-year period.

In the US, a grand jury has found that 301 priests in the state of Pennsylvania sexually abused minors over a similar period.

Francis meets on Thursday with US Church leaders to discuss that report, as well as a scandal involving a former American cardinal and demands from an Italian archbishop, Carlo Maria Viganò, that the pontiff step down over that case.

Cardinal Daniel DiNardo, president of the US bishops’ conference, asked for the meeting after Viganò last month accused the pope of knowing for years about sexual misconduct by former US cardinal Theodore McCarrick and doing nothing about it.

Archbishop Viganò said he had told Francis soon after the pontiff’s election in 2013 that McCarrick, former archbishop of Washington, DC, had engaged in sexual misconduct with adult male seminarians.

McCarrick resigned in July over separate allegations – which US Church officials said were “credible and substantiated” – that he had abused a 16-year-old boy almost 50 years ago.

McCarrick, whom the pope ordered to live a life of seclusion and penitence, has said he has “absolutely no recollection” of such an incident. He has not commented on the allegations of misconduct with the adult seminarians.

Hours after Viganò’s statement was published, Francis told reporters that he would “not say a word” about it because it “speaks for itself”. However, the Vatican is now preparing a response.

Cardinal Donald Wuerl, who succeeded McCarrick as archbishop of Washington, DC, told priests on Tuesday that he would travel to Rome to discuss his future with the pope.

Wuerl (77), who was bishop of Pittsburgh between 1988 and 2006, has been under scrutiny over his handling of sex abuse cases during the period addressed by the Pennsylvania grand jury.

He has defended his overall record in Pittsburgh, but has also been accused of knowing about sexual misconduct by McCarrick, which he denies. – Reuters