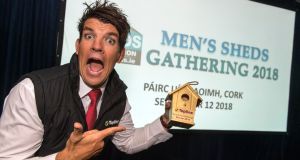 Former Ireland rugby international Donncha O’Callaghan, who says he “lost 30 of his closest friends” when he retired, is drawn to supporting Men’s Sheds because they give people an outlet for camaraderie and fun.

Speaking to “shedders” at an International Men’s Shed conference in Cork on Wednesday, Mr O’Callaghan said male friendship is a vital component of life.

“I miss the routine and the schedule. I miss the group dynamic of going somewhere and hanging around with a group of lads,” the former Ireland and Munster second row said.

“I lost 30 of my closest friends because they were always in that environment. We always hung around together and had similar interests. The club goes on and you drop out the back.”

He said when he spoke to shedders as part of his work as a Topline ambassador, he discussed how he missed his almost “regimental schedule.”

“Some of the men there had retired and they were able to coach me through it. And they did tell me ‘Yeah you will find days when you will be down about it but you have to make sure you have a purpose and are getting out.’

“I found it really good that they had real life experience.”

Meanwhile, men who would prefer to discuss their problems “shoulder to shoulder” rather than “face to face” should head to their nearest men’s shed, according to Irish Olympian David Gillick.

The former professional athlete told the conference he could empathise with the experience of older men as when his career ended prematurely through injury he struggled with his sense of purpose.

Mr Gillick said having come sixth in the World Championships, his life “fell apart” with a series of injuries.

“It was all about success and I wanted more success. For those of you who maybe have worked for a number of years, maybe you were able to retire of your own accord, maybe you were forced to retire through illness. I can relate to people who have had that kind of frustration and that anxiety. I lost my purpose. I didn’t know who I was.”

Mr Gillick called on Irish men with feelings of despair or isolation to get involved in the shed movement and to listen to their peers.

“Just listen. You don’t have to fill the air. Sometimes a bit of silence can be the greatest thing. Let them talk.”

Shedders travelled from as far away as Iceland, Denmark and the UK for the conference at Pairc Ui Chaoimh.