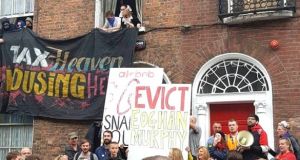 Protesters at 41 Belvedere Place in Dublin. Photograph: Take Back the City

Activists involved in a protest movement occupying vacant Dublin city centre properties have been served a legal notice to leave a third building.

Occupants took over 41 Belvedere Place last Saturday, the third building the protestors have occupied in protest of the housing crisis since early August.

On Tuesday the group behind the protest, Take Back the City, were served a legal notice by lawyers acting on behalf of the owner, demanding the occupants leave the building by 6pm on Thursday.

If the protestors failed to vacate the property the owner would seek an injunction at the High Court, the notice served to the property stated.

The letter stated the building was “unsuitable” for habitation, as support structures had previously been removed from the top floors of the four storey building, which created a safety risk to anyone inside.

The letter from Dungarvan-based solicitors Lanigan and Curran said they were acting on behalf of MJH Property Management Ltd.

The letter warned if occupants failed to leave the premises and “if it becomes necessary to make the threatened court application, we will also seek an appropriate costs order for the legal costs incurred by our client.”

The letter also warned the property was not currently compliant with fire safety regulations. It is understood the building had been vacant for a number of years.

MJH Property Management Ltd is a firm registered in the United Kingdom. Michael (Mike) Joseph Horgan is listed as the sole director of the firm, which reported assets of £3.1 million in 2017, according to filed accounts.

Planning permission to convert the interior of the Belvedere Place property from ten bedsit units to four apartments was granted by Dublin City Council on June 26th .

The address of MJH Property Management is listed as Sallybrook, Dungarvan, Co Waterford on the planning application. A previous application to redevelop the rooms as nine ensuite bedrooms was refused in 2016.

On Tuesday evening a group of masked men secured another property the activists had been occupying for the last three weeks, 34 North Frederick Street.

Gardaí from the public order unit attended the scene to separate the men who entered the property from a large number of activists from the Take Back The City group.

The masked men, who would not identify who they were acting on behalf when asked, left the scene in a white van that did not have a front registration plate.

A British registration plate on the back of the vehicle indicated the van has not been taxed since August 2014, according to an online UK Government vehicle enquiry search of the registration number.

The owner of the property, Patricia Ní Greil, secured a High Court injunction on August 28th requiring the protesters to leave the building, which the occupants defied.

Six activists were arrested by gardaí for public order offences, following confrontations on the road outside the property. The individuals were released from Store St Garda Station late on Tuesday night.

The Take Back the City group plan to hold a demonstration outside the Frederick St property, which has been boarded up, at 5:30pm on Wednesday.