Thinking Anew: ‘Who do people say that I am?’ 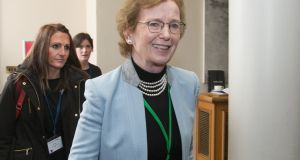 It really is a startling question. In tomorrow’s Gospel Jesus asks his disciples: “Who do people say that I am?” They went on to tell him the various answers they get to that question and eventually Peter tells him: “You are the Christ.”

Being human means being part of society, it means we interface with other people, we like to know what they think of us. All of us relax in the knowledge that we are accepted, appreciated and loved among our own people.

Concern Worldwide celebrates this year its 50th anniversary and to mark the occasion the international aid agency held a conference in Dublin Castle last week. The speakers included the President of Ireland Michael D Higgins and former US president Bill Clinton.

Many people with experience in humanitarian work took part in panel discussions throughout the day. Among those on the panels were recipients of Concern’s work, Irish and UN diplomats and also a former president of Ireland, Mary Robinson.

As I spent 11 years working in the Concern press office, the agency kindly invited me to attend.

The conference began with a welcoming address from Concern’s chairman John Treacy. With a short lunch break, it was non-stop talking until 6pm . Many words were spoken during the day.

Tucked away in all the talking, someone told a story about how they had met a young woman who was living in terrible conditions in Syria during aerial bombardment. The gist of what she said was that she felt she was lost, that no one recognised her, no one looked into her eyes and spoke to her as one person talking to another.

I came home from the conference, tired but inspired by what I had heard, my interest in humanitarian and development work rekindled.

The next day I read tomorrow’s Gospel and in a completely new light I read that line, “Who do people say that I am?”

President Higgins in his address to the conference accused the five permanent member states of the United Nations Security Council of embarking on a new arms race. He said that France, China, the US, the UK and Russia are responsible for two-thirds of the world’s weapons production. He spoke of the scandal and madness of how the world’s manufacturers of arms sell their tools of death in the developing world.

And they are the very weapons that kill and maim and cause untold suffering to so many people. They are part of the situation that makes it impossible for that Syrian woman to feel any sense of dignity that would allow her to be recognised for what she is by another person.

At one point during the day, Mary Robinson, without any hesitation, said that Europe’s “migration policy is disgraceful”. Again, the emphasis was on caring for the individual person.

I’m back thinking of those images of people frightened out of their lives being herded from place to place around Europe’s southern borders. How can they ever get a sense of being respected or listened to? Should they ever ask themselves the question “Who do people say that I am”, they know immediately what the arms manufactures think of them and what the rich world thinks of them.

President Higgins stressed the important role women play in conflict resolution. He instanced the work they did in the Northern Ireland peace process.

It is generally accepted by those working in humanitarian relief aid that women play a vital role.

The conference was packed with wise words spoken by knowledgeable and wise people. And yet one of the finest nuggets of the day for me was that sentiment which the Syrian woman said to an aid worker.

When we treat all our sisters and brothers with dignity, we are embracing Peter’s response to Jesus: “You are the Christ”.