‘The little things make a difference’ 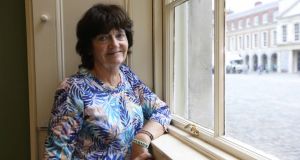 Frances O’Keeffe, one of Concern’s longest-serving volunteers and a board member of the 50-year-old humanitarian group. Photograph: Sasko Lazarov / Photocall Ireland

Frances O’Keeffe, a public health nurse, has lost count of the number of times she has gone overseas with Concern Worldwide, helping the world’s poor and vulnerable.

One of the Irish aid agency’s longest-serving volunteers and a board member of the 50-year-old humanitarian group, she easily lists off the far-flung troubled countries she has worked in since 1988. They include Rwanda, south Sudan, Afghanistan and Somalia.

Her first mission, as a 26-year-old to Bangladesh in 1988, was an “extraordinary experience” and the reason she has stayed with Concern for three decades.

She was in the country two months when it had the worst floods in 250 years. The experience was “an eye opener” seeing a poor country but where people were willing to help themselves.

“As a volunteer, you think you’re going to go to give something and in the end you realise you are taking a lot more than you are able to give,” she said.

Ms O’Keeffe’s last mission was to south Sudan in 2014 where a temporary UN camp that was supposed to house a couple of thousand people is now home to 120,000.

A native of Limerick, she was drawn to Concern because two priests, Fr Jack and Aengus Finucane who helped establish Concern, were from her home county. The brothers earned the agency worldwide recognition because of their famine relief efforts in Biafra, west Africa in the late 1960s.

“I felt I would like to do something to give back. I felt I had an easy sail,” she said, adding that she was also attracted to the fact that Concern was non-denominational and it would expose her to other religions.

Ireland being a former colony, with a history of famine, immigration and conflict, made it easier for Concern and other Irish aid agencies to form immediate bonds with people they tried to help.

“There is something about our Irishness that makes us connect so easily with people,” said Ms O’Keeffe who was chairwoman of Concern from 2010 to 2014.

It was also the agency’s willingness to work as partners with locals. “We treat people as equals,” she said.

While technology has made it easier to get money to people in need, the agency’s work has become more dangerous as Concern has focused on “fragile states” where humanitarians are much more targeted.

“We have to be much more cognisant of the fact that we can be at risk and we can put other people at risk while we work,” she said.

The ethos of the agency – “having great compassion about people” – has not changed in a half-century, said Ms O’Keeffe. While the challenges are huge, Concern finds success in “small steps”, she said.

“The little things make a difference, certainly to me,” she said.