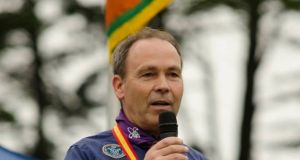 Chief scout Christy McCann did not rule out seeking to contest a further election, given he stepped aside from the role shortly after he was re-elected in 2018. Photograph: Scouting Ireland Facebook page

A number of senior Scouting Ireland figures have called for the suspension of chief scout Christy McCann to be lifted “immediately”, in a renewed bout of internal conflict within the youth organisation.

Mr McCann and three other voluntary officers were found to have acted inappropriately in the handling of a rape allegation concerning two adult volunteers.

The four temporarily stepped aside in April 2018, following coverage of controversy by The Irish Times. A subsequent investigation made a number of findings in early 2019 against the four officers over the handling of the complaint.

A subcommittee set up to deal with the findings decided to suspend Mr McCann, and two other officers, David Shalloo and Thérèse Bermingham, from their roles. The fourth, board member Ollie Kehoe, had already stepped down when the organisation’s entire board resigned the previous year.

A December 11th letter signed by three former chief scouts, and Mr McCann himself, called for the suspensions to be lifted “immediately”. The other signatories were Martin Burbridge, Ken Ramsey and Donald Harvey, who are also honorary vice-presidents of the organisation.

The letter said while the suspensions were to last until the organisation’s national council next year, the amount of time the officers had already spent “inactive” should be deemed “sufficient punishment”.

It said there was no doubt lifting the suspensions “will present difficulty for the board of directors,” given past dealings with the Department of Children and former minister for children Katherine Zappone.

Previously Ms Zappone twice suspended the youth organisation’s State funding in 2018, due to governance concerns over the handling of the controversy.

Mr McCann had been re-elected as chief scout in early 2018 for a three-year term which will come to an end in April 2021.

The letter said the elections due to be held next April “should be deferred until September or October,” due to the “issues that need to be addressed in the coming months”.

Speaking to The Irish Times, Mr McCann said under the organisation’s constitution a chief scout was limited to two terms. However, he did not rule out seeking to contest a further election, given he stepped aside from the role shortly after he was re-elected. “Technically I haven’t served a second term … I haven’t really had a second term,” he said.

The letter said the senior members were “very concerned for the future of our movement”, and their intervention had “no intention whatsoever” of trying to undermine the current board.

They called for the board to “seek additional Government financial support” to help the organisation fully return to running activities for young people during the pandemic.

Following coverage of the initial Scouting Ireland controversy by The Irish Times, increasing numbers of survivors of child sexual abuse in predecessor scouting bodies began to contact the organisation.

A report by child protection expert Ian Elliott, published in May 2020, concluded past abuse had been “tolerated” at the highest levels, and covered up to protect the reputation of the movement. Scouting Ireland has identified more than 350 alleged victims of historic child sex abuse, and 275 alleged perpetrators.