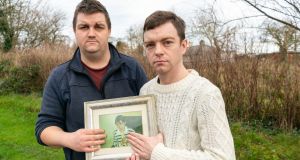 David and Patrick Collins, brothers of Sandra Collins who went missing in Killala, Co Mayo 20 years ago, at their home in Crossmolina. Photograph: Keith Heneghan 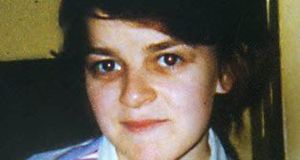 On Friday evening the family of Sandra Collins will turn on Christmas lights outside the home where she grew up – and think about getting her back.

It will be 20 years to the day since she disappeared in Killala, Co Mayo, her fleece jacket, found by the pier, seemingly the last indication of her existence.

The Christmas lights have been turned on in her memory since about 2006 when her father Joe began the tradition.

“Every year he said he would light a way home for Sandra,” her brother Patrick says.

He and his three siblings continue the custom. Sandra’s brother James was killed in an accident six months before her disappearance and her parents Joe and Eleanor have both since died, without ever finding out what happened to her.

Sandra, who was pregnant when she vanished, would have turned 49 on December 14th. The family believe she was murdered.

Every year, as more time passes, the lights display gets bigger, Patrick says. “Maybe people might just look into the garden and think, my God those people loved Sandra.”

On National Missing Persons Day on Wednesday, he wants to press home the importance of recovering his sister’s remains.

“I would give everything I own in the world to get her back, to end this and be free of it,” he says. “There isn’t enough words to tell what it would mean. It would give us back our lives, what’s left of them.”

Many people are never found. As of last month, 823 missing person cases remain “open” with An Garda Síochána. Of those reported missing this year, 52 have yet to be located, including 18 children.

Some of those cases come to the attention of Chris O’Donovan, co-ordinator of the missing.ie website, administered by the Cork City Missing Persons Search and Recovery organisation which was set up by Fr Aquinas Duffy in 2000.

The site displays rows upon rows of the faces of Ireland’s missing and details including where they were last seen and what they were wearing. People contact the site with, or in search of, information on missing relatives. However the range and nature of information that can now be shared is narrower under General Data Protection Regulations (GDPR).

Even in the last couple of years the volunteers who run the site have had people reported missing contacting them about having their information online.

“Saying, I am not missing; I don’t want to go home. Please take my picture down. It doesn’t happen often but it does happen,” Mr O’Donovan says. “People go missing for all sorts of reasons. Some people want to go missing.”

They get good news too; recently one relative was reunited with family after 20 years. Mr O’Donovan will not discuss the details other than to say both sides had been trying to find each other.

They have requests for information and assistance from the UK and the United States. Their first point of contact is on a Facebook page where new cases are regularly alerted. They can get 50-100 emails a day.

“They are all unusual because a lot of the time there seems to be no rhyme nor reason to it. Every case is individual, no two cases are the same,” Mr O’Donovan says, noting an increase in foreign nationals reported as missing to the site in the past two years and a shift in the age profile of people they look for, younger, and more on the streets.

“Our job is to give people hope. Unless you have a resolution one way or the other you try to give them hope.”

One source of increasing hope for some comes from Forensic Science Ireland (FSI). In the past five years its DNA database has been helping solve more and more missing person cases through the identification of remains.

It relies on family members of missing people coming forward to supply DNA samples that can later be compared to those taken from newly discovered remains. There is also a number of unidentified remains – including a body from the 1968 Tusker Rock tragedy in which 61 people were killed after an Aer Lingus plane crashed in the sea off Co Wexford – being stored in case family members come forward in the future.

Chris Enright, FSI director general, says the technology is still improving and they now use software that allows them conduct familial analysis with several relatives, further increasing the chances of a positive detection.

“It’s never certain, it’s always degrees of confidence. The more family members you have, the better the software; you need all of these things to be humming for the process to work.”

Mr Enright stresses that giving DNA samples to the database during Covid is not only possible, but safe. His team expects to have another 40 families added this year.

While the science is challenging, it has proved its worth. Last year FSI had eight successful matches; four in cases where the identity of the remains was suspected, and four “cold hits” where the remains were matched through the database without other investigative leads. To date this year, FSI has had nine further matches.