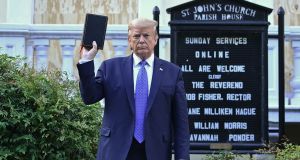 “Donald Trump was widely condemned for making use of the Bible for what the American Primate Michael Curry described as partisan political purposes.” Photograph: Brendan Smialowski/AFP via Getty Images

It was rush hour on the Dart. Standing room only. Close by a woman sitting with her two boys aged eight and 10 asked them to share so that I could have a seat. As we chatted, I asked the boys about the crest on their tops. They said it was their school crest, a Gaelscoil or Irish-language school, and that is significant because this was an immigrant family – from the Philippines. The mother explained that she wanted her boys to be familiar with the culture and show respect for their adopted country. These strangers, of different race and colour and possibly religion, showed me that people who are different have so much to contribute.

One of tomorrow’s readings from Genesis chapter 18 describes how Abraham dealt with three strangers that came his way: “Let a little water be brought, and wash your feet, and rest yourselves under the tree. Let me bring a little bread, that you may refresh yourselves . . .” It did not end there because Abraham then ordered his servants to prepare a feast which he himself served. Abraham is remembered in Judeo-Christian tradition for his hospitality to strangers.

In the gospel reading, Jesus sends his disciples out telling them to expect to be offered hospitality; anyone refusing them were to be condemned.

Recent events in America remind us that people can be treated as strangers within their own country, something not unknown on this island even today, so we need to be careful when judging others. But the brutal killing of George Floyd by police in Minneapolis led to an explosion of anger and outrage by African-Americans and sympathisers around the world. While violence and looting have to be condemned, it is worth remembering and accepting that the violence started four centuries ago when white Europeans kidnapped African men women and children and enslaved them for generations.

Many of their descendants feel that they are being treated today as non-citizens. America needs racial healing, which is precisely what President Trump’s administration seems incapable of providing. A warlike speech condemning protesters followed by a photo-op in front of St John’s Episcopal (Anglican) Church with a Bible in his hands drew a stinging rebuke from the bishop of the diocese, the Right Rev Mariann Budde: “He took the symbols sacred to our tradition and stood in front of a house of prayer in full expectation that would be a celebratory moment . . . In no way do we support the President’s incendiary response to a wounded, grieving nation. In faithfulness to our Saviour who lived a life of non-violence and sacrificial love, we align ourselves with those seeking justice for the death of George Floyd.” Prophetic and courageous words.

Donald Trump was widely condemned for making use of the Bible for what the American Primate Michael Curry described as partisan political purposes.

Trump would do well to consider what Abraham Lincoln thought of the good book: “I believe that the Bible is the best gift that God has ever given to man. All the good from the Saviour of the world is communicated to us through this book. I have been driven many times to my knees by the overwhelming conviction that I had nowhere else to go.”

Racial discrimination is not confined to America, as the Taoiseach pointed out recently, and wherever it is found in the West it is often an expression of what is called white supremacy, a view that is clearly anti-Christian. Fr Richard Rohr explains why: “Our inherent dignity has nothing to do with our race, or religion or class. Hindus have it, Buddhists have it, and so-called pagans in Africa have it. They are just as much children of God as we are. Objectively. Theologically. Eternally. Where else do you think they came from? Did some other god create them, except the God? Their divine DNA is identical to ours. We deny our supposed monotheism (there is one God) if we believe anything else. Far too many Jews, Christians and Muslims have been anything but believers in one God who created all things.”