Thousands at risk of ‘holiday hunger’ if school meals dropped 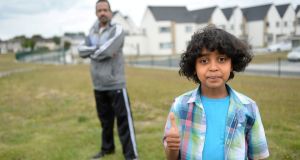 Thousands of the country’s poorest children are at risk of “holiday hunger” if free school meals programmes are not extended – or substituted – through the summer, child advocates warn.

Malnutrition among the most vulnerable children at the end of the summer is a “serious concern” when thousands will be left without a guaranteed daily meal.

About 250,000 children, in 1,580 schools, are provided with sandwiches, fruit, milk and snacks under the school meals programme, while a further 7,000 children benefited from the pilot free hot meals scheme this year.

It will be extended to a further 35,000 children in September.

The programmes are funded by Department of Social Protection, at a cost of €61.6 million this year.

Despite schools closing on March 13th due to the pandemic, children continued getting food supports in the form of food parcels delivered to their homes – including during the Easter break.

Although the schemes are due to finish at the end of this month – the end of the school year – campaigners say their continued provision through the lockdown shows it is possible to continue meal schemes during school holidays.

Over the past 12 weeks food poverty has been a “key issue” raised by organisations working with the poorest families, according to Tanya Ward, chief executive of the Children’s Rights Alliance.

Having children at home all day has put greater pressure on families’ food and fuel budgets.

“We know the school meals programme is one effective way of reaching very vulnerable children…We are calling for its extension through the summer months to help support families who are bearing the weight of this public health crisis and, ultimately, prevent children going hungry. Holiday hunger isn’t acceptable,” she said.

Meal schemes could be extended, she said, with schools assisted by community and voluntary groups through holiday periods.

Senator Lynn Ruane, who is “seriously concerned” about the impact of the end of the school meals programmes on children’s nutritional and mental health, echoed calls for community groups to be consulted, along with schools, on extending meals programmes “over the summer months”.

A spokesman said the Irish National Teachers Organisation also wanted “vulnerable children [to be] fed 52 weeks of the year – through the schools during the school year and exploring other options to ensure children are fed in the community during holiday periods”.

Pádraig McCabe, board member of the Irish Primary Principals Network and principal of St Mary’s National School in Clondalkin, Dublin, is “passionate about the issue of food poverty...If the funding was made available, I am sure there would be no issue organising the community to work with the schools.”

British research, published in 2017 by the All-Party Parliamentary Committee on Hunger found: “Holiday hunger can... exacerbate summer learning loss, with children who do not get enough to eat over the summer... returning to school weeks, if not months, intellectually behind their more fortunate peers”.

A spokeswoman for the Department of Social Protection said: “The objective of the [school meals] scheme is to provide regular, nutritious food to children who are unable, due to lack of good quality food, to take full advantage of the education provided to them.”

She said Minister for Social Protection Regina Doherty had, however, asked the officials to examine whether “certain...children with particular needs over the summer” could be assisted.

Ahmed Awadalla (8) “really misses school, misses his friends, misses everything”, according to his father, Tarig.

The third-class pupil at Our Lady of Lourdes National School in Inchicore, Dublin, also misses the daily hot meal he got there.

He and fellow pupils were among the first to benefit from the pilot hot school meal scheme, funded by the Department of Social Protection. Delivered to 7,000 children this year, it will be extended to 35,000 more children in September.

“The hot lunches are very good,” said Mr Awadalla. “He loves it. To be honest, it is really helpful.”

Since the school closed on March 13th, Ahmed has instead been getting food boxes from Carambola, the company that provides the hot lunches, delivered to the family home.

“When the delivery comes, you cannot imagine how he is happy,” said Mr Awadalla. “He says: ‘It’s my parcel.’ His name is on it. He is eight years old and to have the parcel delivered specially for him, he is so happy.”

Parcel contents vary, he said. “Sometimes milk, juice, pasta, pasta sauce, fruits, sometimes onions, carrot, potatoes, stuff like this for kids. There are snacks, like that they get in school. It’s good. It helps.”

Ahmed is one of four boys, aged between one and 15 years. Tarig and his wife, Habab, originally from Sudan, are refugees and have been in Ireland eight years. He was a lawyer before they fled their country’s civil war.

Mr Awadalla said his English was not good enough to practise law here. Though he has completed several courses, including one in home insulation, he has been unable to get work. “I tried many places, shops, restaurants and they all say no because I have no experience. So I decide to focus on my kids.”

He gets job-seeker’s allowance and the family live in a council home. “Definitely money is a worry with children.” Food costs had increased during the lockdown, he said.

“When you stay home, you feel stress, you find yourself inside the kitchen looking for something to eat. So we were eating more to be honest. And the kids all the day long at home. It is stress.

“The parcels they help a lot, not just financially, emotionally too. You feel this country is taking care of you, they are helping you even with this small thing. It makes you happy, feel good. When you are happy, you are healthy. We save some money and it all helps.”

Asked if he would like food supports to continue through the summer, he said: “I am not going to say it will be a disaster if they stop, but it will help if it keeps going.”