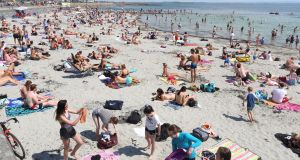 Salthill beach during the heatwave in Galway on Monday. Photograph: Joe O’Shaughnessy

Gardaí around the country reported large gatherings of people at beaches and beauty spots on the Monday bank holiday despite restrictions on movement because of the coronavirus pandemic.

However, few major incidents of public disorder were reported. Garda figures on the number of people arrested over breaches of the restrictions were not available on Monday night.

Tens of thousands of people headed out in the sunshine across the country on Monday, which was the hottest day of the year so far with temperatures exceeding 27 degrees in the west of the country.

Tuesday is forecast to be the hottest day of 2020 so far with highest temperatures in Munster and Leinster as a warm plume of air moves over Dublin and Cork.

Separately, thousands of people gathered in Dublin on Monday to protest against the killing of George Floyd by police in the US, one of many Black Lives Matter protests that took place globally, but gardaí did little to enforce the coronavirus restrictions on non-essential travel due to the numbers of people involved. Protests are not considered essential journeys under Government regulations.

“There were lots more on the roads. Lots more gathering. But groups are mostly keeping apart from each other, which is what we’re asking for,” said one Garda who had been on patrol in north Dublin city on Monday.

Several public beaches were closed by gardaí around the country due to the build-up of large crowds. In Salthill, Co Galway, two males were arrested on Saturday after a large public order incident involving some 40 youths. Local gardaí maintained a presence in the area throughout the rest of the long weekend to prevent repeat disturbances.

Beaches in counties Cork, Kerry, Donegal and Louth were also closed due to the size of crowds gathering there.

Meanwhile, a leading expert has warned that house parties being held around Ireland are a “disaster” for efforts to contain the spread of coronavirus.

Gardaí have reported a large increase in house parties in recent weeks despite the ongoing lockdown.

Prof Sam McConkey, infectious disease specialist at the Royal College of Surgeons in Ireland, said hundreds of people gathering at beaches was “relatively safe” but dozens turning up to individual house parties was “very, very bad”.

“Indoor house parties are a disaster for this,” he said. “Whereas being outdoors in the open air, even if you had 500 people on a beach, is relatively safe. The sun kills it and the wind blows it away.”

On Sunday more than 60 residents living near University College Cork held a silent protest against what they claimed were breaches of Covid-19 restrictions by students holding parties in rented accommodation.

Prof McConkey said while the declining number of new cases of coronavirus was “very heartening”, more clarity would be helpful on the proportion that came about through “unexplained community transmission”.

If it was significant, it would be “very worrying because if would mean there is still uncontrolled spread of the virus, [and] that we haven’t got knowledge of the trains of transmission well enough yet”.

Any further easing of the restrictions should be dictated by the scale of unexplained community transmission, he told RTÉ’s Morning Ireland.

“If we relax restrictions when there are still, say, 20 or 30 cases of community transmission, we know that . . . over five days it will double, and then that means over 50 days it will rise exponentially, a thousand-fold,” he said.