Government must complete review into investigation and prosecution of sexual offences, hears webinar 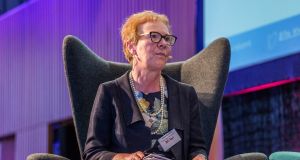 Noeline Blackwell, chief executive of the Dublin Rape Crisis Centre, also urged the Government to complete and publish the review it announced over two years ago into the investigation and prosecution of sexual offences. Photograph:James Forde

The next government must increase financial support for “under-resourced” groups working with survivors of domestic and sexual violence , a webinar has heard.

The online discussion on violence against women, hosted by the National Women’s Council of Ireland, also heard calls for a minister to be appointed to ensure gender equality across Irish society.

Noeline Blackwell, chief executive of the Dublin Rape Crisis Centre, also urged the Government to complete and publish the review it announced over two years ago into the investigation and prosecution of sexual offences.

“Two years have gone by and hundreds of complainants have gone through the criminal justice system since then,” Ms Blackwell told Thursday’s webinar, warning that complainants were being sent into the system without adequate legal support and advice.

The current legal system is “perfectly adequate to deal with the theft of a car but not fit for purpose for intimate violence”, she said. “We need to allow victims to have access to justice. There is no excuse for the length of time we’ve been waiting for that review.”

Sarah Benson, head of Women’s Aid, said a “whole of government response” was needed in response to gender based violence. “We need to ensure that education for prevention, communication for online harassment, health for children and families, access to justice – that all those departments have a clear mandate for going forward.

“Our resources were very diminished before this crisis started and it has really shown the cracks in our system like never before. We’re moving out of the initial crisis phase but we need to stand up and say this has been under-resourced for far too long. It’s clear now how many in our society are suffering.”

Covid-19 has created the “perfect storm” and “worst nightmare” for people who do not feel safe in their homes, said Ms Benson

. Calls to Women’s Aid rose by nearly 40 per cent between March and May when compared to the same period last year with many calls being made in the middle of the night from garden sheds and cars, she added. “We still remain fearful for those who have not been able to reach out at all.”

Having spent months in lockdown, the general public now has a small appreciation for how the lives of victims of domestic abuse are controlled, said Ms Benson. “We’ve all been told to stay home… we have been curtailed and constrained. Perhaps there is a level of empathy that we can hold on to and people can recognise what is happening in abusive situations more than before.”

Ms Benson underlined the shortfalls of the current “gender neutral” legal system which is based on “patriarchal systems and structures which are centuries old which were never predicated on an even playing field”.

“You could see someone granted a protection order but the women is still expected to travel to meet her abuser with the kids. Her every instinct to protect herself and her children from further abuse is destroyed by the family law system.”

Ms Lynch also flagged the “racial element” for women going through the Irish family law system and claimed outcomes for women who had sought protection was often harsher. “A white middle class woman, she will be more likely to have a better outcome for her and her children… that really needs to be looked at.”

Dubravka Šimonovic, UN special rapporteur on violence against women, told the webinar that governments must continue to implement all measures introduced during the pandemic to combat gender-based violence as lockdown restrictions are eased.

Ms Šimonovic also highlighted the “insufficient response” from criminal justice systems worldwide in relation to cases of sexual violence and rape, warning that many laws “foster impunity for perpetrators”.