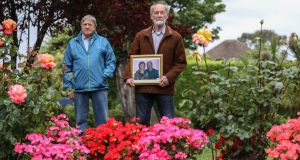 Patrick Cloak and Joe Brabazon, whose wives, Christine and Kay, are residents of St Mary’s. ‘They have given us no reason whatsoever about why it’s closing.’ Photograph: Crispin Rodwell

Residents’ families and staff at a south Dublin nursing home will protest outside the home on Friday, calling on the HSE to take it over.

They say there is no need for the 152-year-old St Mary’s Centre (Telford) nursing home on Merrion Road to close, arguing new management and investment would save it.

They say its founders, the Sisters of Charity – a member of which sits on the board – “cannot just walk away from this”. The home is run under the ethos of the order, and it owns the site accommodating the home and other disability services.

The sisters say, however, they ceased managing St Mary’s in 1996 and first heard it was closing on June 3rd.

Telford management announced last week it could not meet statutory and regulatory requirements or fund the costs needed to meet them.

St Mary’s was founded by the Sisters of Charity in 1868 as a school and home for visually impaired girls and women. It has capacity for 58 residents in two units – St Oliver’s and Loyola House. Its remaining 35 residents are women.

Families say they were told by phone last week the home would close by the end of the year. They were not consulted about the closure, offered opportunities to fundraise to save it, or given any indication about their loved ones’ futures.

In letters this week management told them “with enormous regret” and “owing to insurmountable funding issues, the board has taken the extraordinarily difficult decision . . . to close.”

Joe Brabazon’s wife Kay (81) has been in St Mary’s since last year. “She has Alzheimer’s. I find the care excellent. I couldn’t fault it.”

He was “shocked” to hear of the closure.

“I’m scared for Kay. Where will she be? Will she get the same treatment? She sees the staff there as family. I don’t believe it needs to close. I think it would be very good if the HSE was to step in and take it over.”

And the nuns, they can’t just put their hands up and say, ‘Nothing to do with us’

Christine Cloak (72), who has Alzheimer’s, has been here for four years. Her husband Patrick, describing her as “very frail, delicate”, says the care is “excellent”.

“They have given us no reason whatsoever about why it’s closing, just this stuff about needing money. They are a charity. Why not set up a GoFundMe campaign?

“And the nuns – after over 100 years of founding St Mary’s and running it and still being involved, they can’t just put their hands up and say, ‘Nothing to do with us.’ I’d like to hear from them.”

The two most recent Hiqa reports, published in 2017 and 2019, were critical of governance and management and the lack of space and privacy in St Oliver’s unit.

The 2019 report notes: “Inspectors were told by the person in charge that there were resources ring-fenced for improvements to the centre’s premises as required to meet regulatory breaches identified in the centre’s previous reports.”

It says: “The centre’s financial resources had not been used to enhance the environment and improve the quality of life of residents.”

Shay Ryan, activities co-ordinator in the home, says it is unclear why upgrading work was not carried out. “We did fundraisers for it. There was supposed to money set aside to do all that.”

He says staff were told, by letter, last week it would close.

“We are being drip-fed very little information,” he said, adding he would be on the protest on Friday.

The Irish Times asked St Mary’s (Telford) why families were not consulted and why improvement required by Hiqa had not been made.

These questions were not addressed. In a statement, the board said families had been contacted by phone and letter. “Management . . . met with heads of department and letters were sent to all staff. [We] will continue to liaise with them throughout the process.”

The HSE is seeking a meeting with Telford but adds the conditions for it taking over St Mary’s “do not prevail” at the moment.