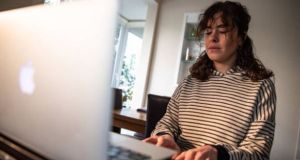 ‘Respondents aged 18-34 were the least likely to report high overall life satisfaction, and had the largest decrease of all age groups between 2018 and April 2020,’ according to the CSO. Photograph: Getty

The damage to mental health and well-being during the Covid-19 pandemic is starkly illustrated in statistics published by the Central Statistics Office.

Young adults in particular are feeling more down-hearted, depressed, dissatisfied with personal relationships and anxious about other people’s health, while women across all age groups are drinking more, smoking more and eating more junk-food since the pandemic started.

The findings of the survey of 4,033 adults, conducted between 23rd April and 1st May, are compared in the CSO report with surveys conducted in 2018 and 2013.

It found that almost a third of respondents said they felt downhearted or depressed “at least some of the time” in the four weeks prior to interview, compared with 13.4 per cent in 2018 and 21.3 per cent in 2013.

“Respondents aged 18-34 were the least likely to report high overall life satisfaction, and had the largest decrease of all age groups between 2018 and April 2020,” says the office, falling from 48.8 per cent to 10.2 per cent.

Again young adults voiced the most concern about somebody else’s health, with 32.4 per cent ‘extremely’ concerned compared to 18.5 per cent of those aged 70 or more.

More than a fifth (22.2 per cent) of adults said that their alcohol consumption had increased, though 17.2 per cent said it had decreased since the lockdown.

Both men (20.9 per cent) and women (23.4 per cent) report an increase in their consumption of alcohol since the lockdown.

“However, a much higher proportion of male respondents (26 per cent) reported a decrease in alcohol consumption compared with females (8.6 per cent).”

Of the one quarter (26 per cent) of respondents who smoked, a third (30.5 per cent) were smoking more.

More than one third (34.7 per cent) of women have increased their consumption of tobacco compared with one in four men (26.2 per cent)

And while the vast majority (89.4 per cent) of smokers over the age of 70 said their tobacco consumption had not changed since the start of the crisis all other age groups reported significant increases. Almost one thirds (32.9 per cent) of those aged 18-34, 33.4 per of those aged 35-44 and 37.4 per cent for those aged 45-54, were smoking more.

Female respondents were “considerably more likely” to have increased their consumption of junk food (54.3 per cent) compared with men (35.6 per cent).

“Respondents that felt very nervous, downhearted or depressed or lonely at least some of the time in the past four weeks reported higher increases in their consumption of junk food and sweets (57.9 per cent, 59.4 per cent, and, 59.6 per cent respectively).”