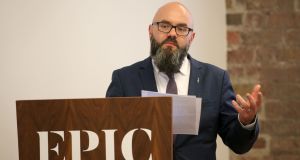 ‘Young people growing up in Ireland from a migrant background need to see themselves represented at these levels,’ chief executive of the Immigrant Council of Ireland, Brian Killoran said. File photograph : Laura Hutton

Ireland has “poor levels of diversity” in positions of authority, in politics, in education and in the workplace, the Immigrant Council of Ireland has warned.

The organisation’s director Brian Killoran said “real change” was needed to give a voice and recognition to Ireland’s diverse people and their talents.

Speaking at the online launch of the Immigrant Council of Ireland’s (ICI) 2019 Impact report, he said changes in recruitment procedures, particularly in the private sector, are necessary to enable people with a migrant background to progress in their careers.

These changes need to happen now or Ireland will have to deal with the repercussions further down the road, said Mr Killoran. “Young people growing up in Ireland from a migrant background need to see themselves represented at these levels, they need to know that’s a possibility for them.”

He said “comprehensive immigration reform and access to justice for migrants” was badly needed in Ireland along with a “strategic plan for migration”.

He also called for a national action plan on racism and the introduction of hate crime legislation without delay.

The State’s current “bureaucratic and slow” migration system, which is often governed through discretionary procedures, is creating barriers to people seeking to build a life in this country, he said.

Also speaking was Labour candidate in last year’s local elections Anne Waithira Burke who grew up in Kenya but is now an Irish citizen. She said rarcism, discrimination and unfair representation are at the heart of Irish governing structures.

She said it is “paramount” that migrant voices are represented in all aspects of Irish life so this country can “protect, preserve and save lives”.

Ms Waithira Burke said she hoped the outrage following George Floyd’s death in the United States had “ignited a fire under the Irish people” to stand up and call for change.

“Yes, Ireland is one of the best places for a migrant to live but we can no longer live in denial of the fact that things like racism, discrimination and unfair representation are at the heart of our country, meaning at government level.

“Our next generation needs us. I’m doing this for my kids so they don’t have to live the hurt, the racism, the discrimination, that feeling of being invisible with nowhere to go.”

In 2019, the immigrant council received 5,035 calls to its helpline, a rise of 40 per cent on the previous year, with 148 different nationalities represented among callers.

One in five calls were regarding citizenship or family reunification while 14 per cent had a question around EU treaty rights and more than eight per cent were about employment permits.

Many of the calls were answered by volunteers from law firm Arthur Cox who have offered their services pro-bono to the council since last October. Pro-bono support for unaccompanied minors trying to bring family to Ireland was required “because of the absence of State civil aid to support these children,” said Catherine Cosgrave, ICI’s managing solicitor. Ms Cosgrave also called on the next government to address the issue of stateless people living in Ireland, an area which “receives very little attention here”.

Some 27 victims of trafficking received legal advice and assistance from the council last year, four of who had been trafficked into Ireland for sexual exploitation.

The ICI’s advocacy centre worked on issues around domestic abuse, citizenship, rights and entitlements and EU treaty rights while the council also brought five cases to the high court in 2019 relating to child citizenship and family reunification.

The centre ran migrant-councillor internships ahead of the 2019 local elections to help build migrant representation at a political level. Some 56 out of the more than 1,900 election candidates in last year’s local elections came from a migrant background. Of these, just nine were voted in.