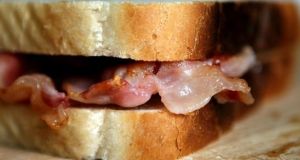 Food poverty: A west of Ireland family resource centre said: “We have more people accessing our services now that we ever did before - for food bags, referrals to other agencies.” File photograph: Anthony Devlin/PA

Increased food poverty and mental health difficulties in poorer areas, as result of the Covid-19 crisis, are detailed in a hard-hitting report published on Thursday.

Produced by the national forum of family resource centres (FRCs) and drawing on survey results from the 121 such centres across the State, it reports higher incidents of domestic violence, worsening behavioural challenges in children and increased demand for food and meal deliveries.

The centres operate in economically disadvantaged areas, supporting families and communities with such issues as childcare, combatting isolation and supporting older people. The survey was conducted over the first fortnight in May.

Asked about the three most significant issues in their communities, 71 per cent of FRCs identified increased calls for parent and family supports; 69 per cent reported increased need for food parcels while 51 per cent say counselling and mental health supports were among the most urgent issues.

One centre in the west of Ireland said the impact on the local community has been huge. “We have more people accessing our services now that we ever did before - for food bags, referrals to other agencies.”

One FRC said it has seen a 600 per cent increase in demand for meals and is providing 175 a day to homes in its area.

“We have distributed 100 packs per week to children, books and activities. We distributed 225 packs with crafts and colours at Easter, with an Easter egg to all children.”

Another reports: “We have experienced a high rate of mental health issues, loneliness and isolation. We responded with additional counselling, daily personal calls, and deliveries to clients.

Many group activities, especially aimed at young people, have gone online, though significant numbers in communities cannot access broadband and are at risk of isolation and deteriorating mental health.

As demands have increased over 93 per cent of the centres have seen their income fall - as activities and services have had to close - during the crisis. Almost three quarters (74 per cent) experiencing income falls of more than 25 per cent.

FRCs’ main concerns for the future are how to continue to provide group activities like parent and toddler and alcohol and addiction groups, summer camps; the loss of income and increased costs; changes required to physical premises to comply with social distancing; and staff and volunteer safety and mental health.

Among concerns for their communities are increased mental health issues, increased household debt and reduced supports for vulnerable children.

1 Covid-19: Warning of similar measures for other counties as Donegal moves to Level 3
2 Aer Lingus staff say they are living in ‘near poverty’ and unable to cover rent
3 Covid-19 Q&A: How are we doing now and is there any good news?
4 Republican leaders reject Trump’s stance on peaceful transition of power
5 Next 10 days critical in fight against Covid-19 in Cork, says adviser
Real news has value SUBSCRIBE