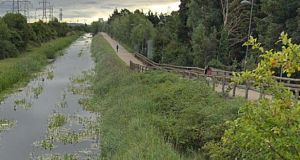 Persistent antisocial behaviour by a small number of young people around Inchicore could expand into the “type of criminality that has plagued other parts of Dublin”, an unpublished report warns.

The children most involved in such behaviour in the area are from just seven families, according to another unpublished report. It states that 25 families – involving more than 50 children – are “of concern” because of the children’s involvement in antisocial behaviour and welfare worries regarding the youths.

Of these families, 11 “have difficulties relating to drug and alcohol dependency” and nine had experienced homelessness, states the report, adding that many of the children “have also struggled with the school system”.

The report, compiled last February, says 19 children were aged between seven and 11 years, 25 between 12 and 17 years and six were over 18 at the time.

The two reports – Building a Sustainable Community in Inchicore and Kilmainham, and Report on Children Involved in Antisocial Behaviour in the Inchicore Area – have been seen by The Irish Times.

The former was commissioned by the Department of Housing in the wake of a public spat between Minister for Housing Eoghan Murphy and his Fine Gael colleague and local TD Catherine Byrne over plans for the State’s first large-scale cost-rental scheme being developed in the area. Cost rental is a housing model where rents charged cover the cost of delivering, managing and maintaining the homes, and so are generally significantly below market rents.

The report was submitted to the department last August and examines the area’s housing and other needs. It comes down in favour of the plan to build 500 homes – 30 per cent social housing and 70 per cent cost rental – on the site of the former St Michael’s Estate.

Its author, retired assistant Garda commissioner Jack Nolan, says the development presents an “opportunity . . . to [provide] an example of high-quality . . . housing” and to be the national pilot for the cost-rental model.

Concerns about “persistent intergenerational social problems” in Inchicore are widespread, he adds. And Dr Nolan notes that the underlying causes of this are “deprivation, unemployment, lack of education and lack of opportunities or possibly an unwillingness to accept opportunities when offered”.

A “more comprehensive approach” than heretofore “is required at this stage to mitigate the potential for these issues to descend into the type of criminality that plagued other parts of Dublin in the recent past. What currently exists is not working effectively and certainly is not working to the satisfaction of all sections of the community.”

The second report, by independent consultant Justin O’Brien, was commissioned by the Canals Community Policing Forum following an upsurge in antisocial behaviour among a small number of young people in Inchicore in summer 2018. These have continued sporadically and include racist attacks, attacks on cyclists and pedestrians along the canal, vandalism and shop-lifting.

It is critical of Tusla, citing a high number of child-protection cases not allocated to a social worker (619 in July 2018). The agency must commit more resources to the area which includes many families “adversely affected by poverty, poor housing and drug addiction that is intergenerational”.

Tusla did not engage with the report but told The Irish Times there had been “a significant reduction in cases awaiting allocation” in recent times, though the number is higher than that cited in the report.