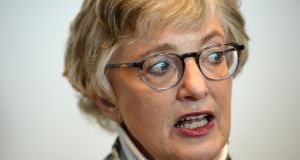 Minister for Children Katherine Zappone: ‘As somebody who has already been keen on getting things done, combing my radical, idealistic spirit with a pragmatic approach, yes I would love to have the opportunity to be in Government again.’ Photograph: Dara Mac Donaill/The Irish Times

Minister for Children Katherine Zappone would like a different portfolio if in Government after the election, she says.

Speaking after an event in Tallaght on Friday she described the election contest in her Dublin south west constituency as a “challenge”. She took the fifth seat in 2016, narrowly beating Fine Gael’s Anne Marie Dermody by 152 votes on the 16th count.

“It is tight. I am an Independent and have only been a TD for three and half years. I have worked all my life in the community in the constituency, but as my great friend Noel Whelan [who died last year] said, the second election is the toughest one.”

She would be keen to enter Government again if elected. “As somebody who has already been keen on getting things done, combing my radical, idealistic spirit with a pragmatic approach, yes I would love to have the opportunity to be in Government again and I would be willing to talk with anyone who wants to talk with me.”

On returning to the same Department she said she felt she “could be completed with this portfolio”.

“There’re always going to be ongoing issues that need to be finished [in the Department] and I do think I’ve brought some a long distance. So no, probably not children, something else . . . But that’s the next step. I just need to get elected first,” Ms Zappone said.

She believes she has “made a difference” at the Cabinet table, “having been the only independent woman” and to have had influence on issues outside as well as within her portfolio. The two major areas during her term were “childcare and child protection”.

After decades of underinvestment in childcare she believes she has overseen the laying of the foundations for a national affordable childcare scheme.

“And we have increased significantly the investment over the years that I have been minister by 141 per cent – doubling the spaces and places available.” She believes ultimately the solution to the childcare crisis is far greater public provision.

“At a personal level I have always thought the State should be providing childcare.” She has established an independent expert group to examine this.

“A better model of public funding would enable fair pay and working conditions for staff, and real affordability for parents.

“We could, we should be moving towards a mixed market approach where you¼ do have some public state provided and the some private provided – like our current education system.”