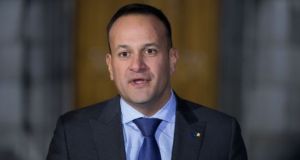 Taoiseach Leo Varadkar said under the Fine Gael Government the number of new homes being built has trebled but acknowledged ‘we haven’t done enough on housing’. Photograph: Tom Honan

A woman who was found in a distressed state outside near Dublin’s GPO on Thursday night was not “put on the streets” by her treating hospital, Taoiseach Leo Varadkar has said.

Mr Varadkar said he had looked into the story and found it was initially inaccurately reported. He said the woman is not 81 as was widely reported this week but is in her early 60s.

She has mental health issues and was discharged from St James’s Hospital in Dublin into the care of a social worker, he told RTÉ’s radio’s This Week programme.

A housing plan was also put in place for the woman, he said. Mr Varadkar said staff at the hospital were “very hurt” by the initial reporting of the story “because the implication was that they had put an 81-year-old woman out on the streets”.

“They did their job and did it well,” he added. “There is a housing plan in place for her. And that’s the most important thing; that she is being looked after.”

Defending the Government’s record on housing, the Taoiseach said a photograph, which was widely shared late last year, of a homeless child eating dinner off a piece of cardboard on Grafton Street was “shocking” and “one I found very upsetting”.

He said the Government had tried without success to find the child in the hope of getting him into a family hub.

Mr Varadkar said he has decided on a date for the next election but declined to disclose it. He indicated he will dissolve the Dáil in the coming days.

He said under the Fine Gael Government the number of new homes being built has trebled but acknowledged “we haven’t done enough on housing”.