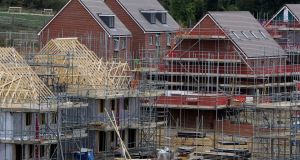 The churches said ‘the trauma of homelessness and housing insecurity could be prevented’ if society is prepared to ensure ‘the economy serves the common good and respects and protects the dignity of all’. File photograph: PA

Sixteen Irish churches have called jointly on voters to pressure politicians over the State’s housing crisis.

These include the Catholic Church, Church of Ireland and Presbyterian Church. Every “local congregation” is affected by the shortage of affordable housing, said Catholic Bishop of Limerick Brendan Leahy – co-chairman of the Irish Inter-Church Meeting (IICM).

“Homelessness is only the tip of the iceberg of a much deeper problem that includes families living in unsuitable accommodation, those living with the stress of mortgage arrears and those who live in fear of the next rent increase. It is our hope that this resource will help local churches to support those who are experiencing, or at risk of, homelessness and to be advocates for their right,” he said.

In an unprecedented move, the Irish Inter Church Meeting and Irish Council of Churches have listed questions people should ask politicians and canvassers they meet during the campaign.

The other IICM chairman, the Rev Brian Anderson who is president of the Irish Council of Churches, said “the trauma of homelessness and housing insecurity could be prevented” if society is prepared to ensure “that the economy serves the common good and respects and protects the dignity of all”.

However, the churches recognised also “that it is not enough solely to look to our elected representatives to resolve this, although we have a responsibility to hold them to account. We also need to ask ourselves challenging questions about the ways in which we may need to change our attitudes and behaviours if we are truly to be on the side of those who are vulnerable and marginalised.”

Ideas for the document originated in 2018 when the Irish churches came together to reflect on the needs of families in Ireland and what, as churches, they could be doing in response.

Under the heading “Three Things You Need To Know”, the documents notes that the 10,000 people housed in hotels and emergency accommodation do not count “adults still living with parents, or ‘couch-surfing’ with friends”.

Moreover, the churches also say that the State built 8,500 local authority and social houses in 1975, but was able to build only 750 two years ago.

“It will take a long time to house all those on the social housing list. The Minister for Housing [Eoghan Murphy] has said that the state has enough land to build 50,000 houses, but that he doesn’t believe this is the answer to the housing crisis,” they say.

“Every day we pay about €2,000,000 to landlords via the Housing Assistance Payment (Hap) and other rent support schemes. This is €3,650,000,000 over the last five years that hasn’t resulted in a single house being built.”

Reflecting on the destitute

Voters are urged to demand of politicians that they commit to a dramatic increase in construction of social housing, curb the powers of “vulture funds” and offer stronger rental regulations.

The churches have also urged voters to discover more about the housing crisis in their area and “the lived realities of those with whom they work” who are affected.

“Would I be prepared to face a degree of suffering so that these peoples’ suffering will reduce. For example, through an increase in taxes to pay for social housing or through a reduction in house prices?” the churches ask.