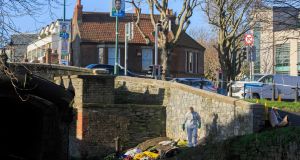 Gardaí at the scene where a homeless man was injured along the Grand Canal in Dublin. Photograph: Gareth Chaney/Collins

Four separate investigations are under way into a homeless man being seriously injured while a utility vehicle was removing tents pitched along the Grand Canal in Dublin.

The incident, which happened between 12pm and 1pm on Tuesday, occurred during clearance works that were being carried out by Waterways Ireland along the canal banks. The man was in a tent on the bank at the Leeson Street Bridge end of the canal at Wilton Terrace.

It is understood that a vehicle with a mechanical arm and claw was used to remove tents that were along the canal which were lifted and placed into a truck for disposal.

Waterways Ireland, which manages the canal, was removing up to 10 tents in the area at the time. An outreach worker from the Dublin Region Homeless Executive (DRHE) was present to assist people sleeping rough on how to access alternative accommodation.

Sources say the occupied tent was not opened but was checked verbally and that there was no response from inside. The worker operating the utility vehicle was then given the go-ahead to move it. When it was lifted, however, the tent began to move and was immediately returned to the ground.

The man inside was removed to hospital by ambulance.

The incident is now the subject of a Garda investigation, an investigation by the Health and Safety Authority, as it was a workplace incident, and separate reviews by Waterways Ireland and the DRHE.

While the DRHE provides homeless services across the four Dublin local authority areas, a spokeswoman said it had no remit to decide to clear tents or items from the canals. This was a matter solely for Waterways Ireland, she added.

In its statement Waterways Ireland said it had been working “in co-operation with the DRHE to remove tents along the canals in Dublin where they have become a public safety hazard”.

“On the 14th January an incident occurred at Leeson Street, on the Grand Canal. Our thoughts are very much with the individual who was involved,” it said.

It is understood “eviction notices” had been delivered to people in tents in the days previously, giving notice of the date and time of the planned “clean-up”.

A source in Waterways Ireland told The Irish Times that they had encountered ongoing issues with tent encampments by the canals. In the past few years, the source added, there had been a “considerable problem with human defecation” and discarded needles by the waterways.

“We are managing a public amenity and we have to manage it in a way that ensures it is safe for the public,” the source added.

The organisation, however, did not move to clear tents or other paraphernalia until given the “all-clear” by the DRHE that rough-sleeper outreach teams had engaged with people there and moved them on to alternative accommodation.

“We go on-site at the end of that process. At that stage our role is to go in and clear away the items which are left behind – needles, tents, and sleeping bags,” the source said.

“We never go on-site without someone from the homelessness executive being there, and they were on this occasion.”

Waterways Ireland faced criticism in late 2017 when it raised water levels on the Royal Canal at Binn’s Bridge in Drumcondra, flooding the banks. It had issued “eviction notices” to people in tents in the area in the weeks previously, telling them: “You unlawfully entered on to the above lands in the past few months and have set up an encampment. You are trespassing on lands which are the property of Waterway Ireland along the banks of the Royal Canal which is a public amenity.”