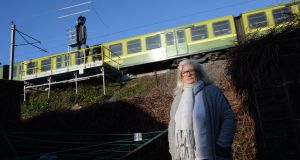 A ‘devastated’ Kayla Jackson in her back garden in Clontarf, Dublin. Photograph: Dara MacDónaill/The Irish Times

A Dublin tenant says Irish Rail “destroyed” her back garden without warning.

Kayla Jackson says she was told she had no right to be consulted on works in the garden as she is not the property owner. Ms Jackson (56), who rents her home in Clontarf, lives alone and has tended her back garden as a bio-sphere [self-contained eco system] since she moved in 12 years ago.

She says trees and hedgerow in her garden, and on the other side of the garden wall on land owned by Irish Rail, had grown to about 40ft in height.

Within the garden, she says, large shrubbery co-existed with wild roses which hosted bees, butterflies, birds’ nests, foxes and “thousands of little grubs”, along with plants and fruits trees.

“It was my sanctuary,” says Ms Jackson.

She was “shocked” on October 3rd last to find men in her back garden and on the other side of the wall felling trees and removing the hedge.

“I begged them to stop and asked them who they were and what they were doing. They told me they were working for Irish Rail and that they had to cut down all the trees. When I asked them who had given them permission, they said they had tried to knock on the front door but got no answer. That’s impossible though because I was here all morning.”

Ms Jackson says she went to work and on her return found “the entire garden had been cleared and destroyed”. It now consists of a lawn, with most of the hedgerow reduced to brown, dead-looking branches. The trees are gone and a railway line and signalling platform that was hidden previously is now exposed.

While Ms Jackson does not mind seeing trains passing every 15 minutes, she feels her privacy has been compromised.

“And all that sound barrier and natural insulation is gone. The back of my house is colder, it’s noisier and I just feel devastated.”

She has survived a “number of traumas” in the past 15 years and the garden she created was “central to my healing and my sense of safety here . . . this has really depleted my quality of life.”

She contacted Irish Rail in early October and was told she “did not have any rights” in the matter, that her landlord had consented to the works.

While one neighbour last week was “happy enough” with the works, others including Kathleen and Martin Boyle were unhappy about trees being felled and understood Ms Jackson’s dismay.

“I don’t blame her,” said Ms Boyle, adding that they too had no notice from Irish Rail.

What do Irish Rail say?

A spokesman for Irish Rail said the company was approached by a neighbour and asked to clear trees and vegetation on its property.

“When such requests are received, we will endeavour to undertake the work in a planned manner . . . after a number of efforts to contact [Ms Jackson] including house visits, we made contact with the owner who gave permission for the tree and vegetation to be removed.”

Stephen Large, Dublin regional services manager with tenancy advocacy Threshold, said although this was the landlord’s property, it was Ms Jackson’s home.

“When State agencies interfere with a tenant’s home it is not unreasonable to expect that the tenant would be informed and that any concerns they have would be listened to. It is also incumbent upon the landlord to inform the tenant if there is likely to be disruption or changes to the property,” he said.

“If renting is to become a tenure of choice, tenants must be a part of the conversation about what happens to their home.”

The landlord did not respond to calls or text messages about the matter.