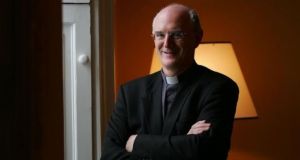 The new Catholic Archbishop of Dublin is to be current Bishop of Ossory Dermot Farrell (66).

A former president of St Patrick’s College Maynooth, he had been parish priest at Dunboyne, Co Meath, until appointment as Bishop of Ossory almost three years ago in January 2018.

The eldest of seven children he was born in 1954 to Dermot and Carmel Farrell, of Garthy, Castletown-Geoghegan, Co Westmeath, in the Catholic diocese of the Meath.

After attending school at in Castletown-Geoghegan and Streamstown, he attended St Finian’s College in Mullingar, and in September 1972 began his studies for the priesthood at Maynooth.

He was ordained at St Michael’s Church, Castletown-Geoghegan in June 1980 and then served as a curate in Mullingar’s Cathedral parish.

In 1985 he went to Rome where he studied for, and in 1988 was awarded, a doctorate at the Gregorian University for a dissertation on The Dogmatic Foundations of Bernard Häring’s Thought on Christian Morality as a Sacramental Way of Life. Fr Häring was a German Redemptorist priest and moral theologian who died in 1998.

His final year in Rome also saw him serving as a Director of Formation in the Irish College in that city.

Returning to Ireland in 1989 he was appointed appointed curate in Offaly’s Tullamore parish and also began lecturing in moral theology at St Patrick’s College, Maynooth.

In 1990 he was appointed executive assistant to then president at Maynooth Msgr Micheál Ledwith, since laicised, and to the Faculty of Theology at St Patrick’s College there, as director of its one-year Religious Studies Programme.

In 1993 he was appointed vice-president of St Patrick’s College, Maynooth, becoming president in 1996, a position he held until retirement in 2007. That same year he took up an appointment as parish priest at Dunboyne and Kilbride In 2009 he was appointed vicar general of Meath diocese.

His appointment as Bishop of Ossory was announced in January 2018, and he was ordained bishop there at St Mary’s Cathedral, Kilkenny, in March 2018.

It is planned, pandemic allowing, that he will be formally installed as Archbishop of Dublin on February 2nd next.

Due to Covid-19 restrictions the announcement of Archbishop-elect Farrell’s appointment to Dublin was livestreamed this morning on webcam, from Our Lady of Lourdes Church on Seán McDermott St in the north city centre.

On his visit to Ireland in 2018 Pope Francis paused outside that Church in one of Dublin’s most deprived areas at the behest of Archbishop Martin. It is also where the remains of the Venerable Matt Talbot are interred.