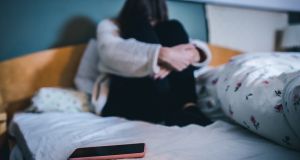 There was a “significant surge” in the number of children contacting a support service during periods of stringent Covid-19 restrictions, the chief executive of the Irish Society for the Prevention of Cruelty to Children (ISPCC) has said.

The welfare charity, which operates the Childline service, said all three methods used to contact it – calls, texts and web chat – had seen increased engagement over the past nine months.

However, the charity reported “peaks” when schools were closed, as children were isolated from friends and other trusted adults.

It recorded an almost 20 per cent rise in the number of contacts to its text service on the week of March 15th, which was when schools were closed and pandemic restrictions were first introduced, over the previous week.

Between March 12th and the end of June, the traditional end of the primary school term, the charity had an increase of more than 100 per cent in users on its website.

“We saw the increase start immediately upon lockdown. Children were out of the schools and we saw a 25 per cent increase [in calls] when we went into our first lockdown,” he said.

The biggest increase was seen in its web chat and text messaging services.

“Children found while they didn’t want to be overheard on a phone call, they could actually go online and have a confidential chat,” he said.

“We saw a significant amount of visits to various sections of our website as well, so this was all telling us that the environment within an unhappy home like that, the last thing you want to do is be overheard because that could exacerbate the abuse.”

By the end of the year, the charity expects it will have had almost 15,000 conversations through its web chat facility.

Mr Church believes this increase in calls for help highlights the importance of children having adults in their lives who are not relatives.

“It really highlighted the part that teachers, sports, mentors, even referees play for children. The school can be a real refuge for these children,” he said.

“Tusla at the time said that the referrals to them had decreased, which is absolutely the case, and that would be logical because a lot of children issues are picked up by your local GAA coach, rugby coach or your teacher. When the child doesn’t have those allies [referrals decrease].”

Christmas Day is normally one of the busiest days of the year for Childline, but Mr Church believes this year will surpass any previous numbers. Last year, there were 865 contacts on Christmas Day.

“We are probably expecting more this time around because of the restrictions, because families won’t have as much contact with people’s aunts, uncles, grandmothers, grandads. We are expecting a busy Christmas for the children.”

Charities have reported funding issues as a result of a decline in donations and the cancellation of fundraisers on foot of the coronavirus crisis.

Mr Church said the ISPCC got out early for a “really successful” emergency appeal in March, but the cancellation of its annual Christmas concert could lead to “a difficult year next year” in financial terms.