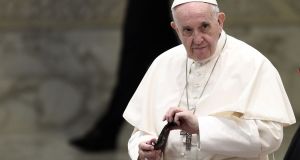 Pope Francis will arrive in Ireland in just over a week. File photograph: AFP/Getty Images

The pro-LGBT priest Fr James Martin will remain on the World Meeting of Families congress line-up despite calls for him to be removed.

Fr Martin will speak on the need for the church to show respect for LGBTQI+ people and their families.

His 2017 book, Building a Bridge (between the Catholic Church and members of the LGBTQI+ community), attracted widespread praise at senior levels in the church.

Fr Martin’s inclusion is a response to anger at the removal of same-sex images from preparatory booklets for the World Meeting of Families (WMoF2018) and the editing of a video dealing with same earlier this year.

A group of lay Catholics has called on the organisers of the World Meeting of Families to rescind an invitation to Fr Martin.

A letter has been sent to Dublin Archbishop Diarmuid Martin, asking him to stop the cleric from speaking at the event.

The Irish branch of the Tradition, Family, Property (TFP) has been gathering signatures to voice its disapproval.

With just over one week to go to the pastoral congress, a spokeswoman said “there will be no changes to the line-up of speakers who have been invited to be part of the event.”

“We are looking forward to welcoming all 292 speakers from around Ireland and from across the world to our gathering of families in Dublin,” she said.

The letter to the Archbishop reads: “The hosting by your Archdiocese of the World Meeting of Families should be a joyful occasion for Ireland. The choice of Dublin as venue by Pope Francis should serve as a consolation for Ireland at a difficult time and is of course the effective reason for the Pope’s pastoral visit.

“We are disappointed and greatly concerned that Fr James Martin, S.J. will speak at the event, casting a shadow over its proceedings. Fr Martin is well known for his dissent from Church teaching on sexual morality. He has articulated views which condone homosexual behaviour in contradiction of the Magisterium.”

By Wednesday night, over 9,500 people had signed the letter.

The first ever debate on child safeguarding in the 25-year history of the Catholic Church’s World Meeting of Families will take place at the RDS debate.

‘Safeguarding Children and Vulnerable Adults’ will include Marie Collins, who quit the Vatican’s child protection commission last year in protest at the frustration of its work by Vatican officials.