Housing activists have called on the government to solve the housing crisis after occupying a vacant property at Summerhill Parade in central Dublin. Video: Jack Power 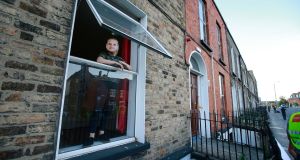 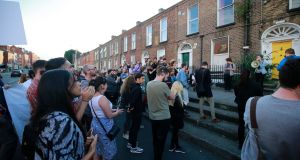 Housing activists who last night occupied a vacant house in inner city Dublin said they have received a “great community response” to the action.

In May 20 foreign nationals were evicted with only 24 hours notice from the property, after an inspection by Dublin Fire Brigade found fire safety concerns.

On Tuesday evening a coalition of housing campaign groups entered the building, 35 Summerhill Parade, Ballybough, and occupied it.

Oisín Vince Coulter, president of Trinity College Dublin graduate students’ union, was one of those who occupied the vacant home.

Speaking to The Irish Times after the first night of the action, he said the group had received a “great community response.”

“We had people stopping in the street saying it was a good thing … I think there’s a general consensus that this is something that is necessary, locally in Dublin and nationally” he said.

Mr Coulter said people slept on mattresses, in sleeping bags, and on floors in the property overnight. “There has never been less than ten or 12, often up to 15 or more people, as the numbers fluctuate as people come in and out,” he said.

Around 40 people from the various campaign groups gathered outside the property for several hours after the occupation began. “There were some very committed activists who sat outside all night,” Mr Coulter said.

On Tuesday night two men in a black SUV, believed to be associates of the owner of the building, parked outside the home for several hours, before leaving. When asked if they were connected to the owner of the property by The Irish Times, they declined to comment.

Three gardaí also arrived on the scene shortly after the occupation began, and spoke to people in the group gathered outside, who were blocking the door to the property. The gardaí left a short time later.

“People [inside] felt a little bit anxious”, when the guards arrived outside the home, Mr Coulter said, but added they believe the occupation is a civil matter, not a criminal one.

Mr Coulter is involved in the Take Back Trinity group, who occupied a building on the Trinity campus in March to protest plans by the university to introduce a €450 exam repeat fee. The university rolled back on the plans after the protest.

On Wednesday morning a Facebook page “Summerhill Occupation” set up by the activists, put out a call for volunteers to take shifts inside the property which continued to be occupied on Wednesday.

Who owns the property?

Speaking to The Irish Times in May, tenants did not know who their landlord was, and only dealt with a letting agent. A spokesman for Dublin Central Housing Action said they had not been able to find a “paper trail” to confirm who the owner of the property was.