Jacquline Bessong's husband was murdered in Cameroon and her son died tragically shortly after she arrived in Ireland, she's now calling on the government for better care for her 80-year-old mother. 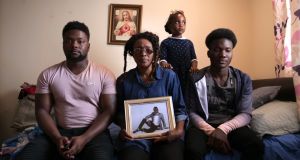 Benedict, Jacquline, Eliz and Freddy Bessong at their home in Naas. The boy in the picture is Jacquline’s son Frank, who drowned in Dublin in 2016. Photograph: Kathleen Harris

A scheme where refugees can bring relatives to live in Ireland is putting pressure on homeless services, and pushing refugee families into emergency accommodation, the director of the Dublin Region Homeless Executive (DRHE) has said.

Asylum seekers with permission to remain in Ireland are becoming homeless as an “unintended consequence” of bringing relatives into the country under a humanitarian reunification scheme, according to Eileen Gleeson, head of the DRHE.

Refugees are assisted in finding accommodation to leave direct provision when they receive status to stay in Ireland, after which they can apply to bring family members abroad to Ireland.

“Our problem is once they’ve got the right to reside, then they are also getting a right to reunify with their families. So what might start off as one or two [people] ends up with much larger families,” Ms Gleeson told The Irish Times.

Families then have difficulty finding larger accommodation, or are evicted by landlords as the property is overcrowded, and end up presenting as homeless, Ms Gleeson said.

The Dublin homeless service had “no issue” with refugees bringing family members to Ireland under the reunification scheme, “but it is putting pressure on homeless services,” Ms Gleeson said.

“In some cases we had reunification where there was one person and it ended up as nine. There was no way that individual was going to be able to stay in his bedsit. Then they present as homeless,” she said. The issue has become more prevalent in the last six months, Ms Gleeson said.

Last November Ms Gleeson was criticised by homeless charities, when she said long-term homelessness resulted from years of “bad behaviour,” and could not be solved by the efforts of “ad hoc” unauthorised groups providing soup and food at night.

Separately, there is a large number of immigrants from outside the EU “trapped” in Ireland’s homeless system, as they have no right to housing supports, Ms Gleeson said.

Individuals from outside the European Union living in Ireland for less than five years, or failed asylum seekers who remain in the country, can only avail of emergency accommodation on a night by night basis. The group cannot be placed in longer term homeless housing, or receive the Housing Assistance Payment (Hap) to help them rent in the private market.

“They are trapped in homeless services, because they are not entitled to be assessed for housing,” Ms Gleeson said.

In some cases immigrants coming into the country were presenting as homeless “within days,” due to difficulty finding housing, she said.

“We’re ending up with people who are stuck in homelessness, because there’s no way out. What we need is a way that we can move them out of homelessness,” Ms Gleeson said.

“We need more direction on how we should deal with them. We need to accept if they are here, do we look after them or don’t we,” she said.

There is a fear legislating to allow housing services support this cohort of people to move out of homelessness could “incentivise” increased migration into Ireland, Ms Gleeson said, adding a European Union wide approach was required.

“While it would be great for us if we got departmental legislation that let us deal with [these] homeless people, we really probably need an EU directive on it,” she said.

The DHRE has set up an internal Brexit working group to prepare for the knock-on effects of a potential influx of immigrants, if current migration into Britain shifts towards Ireland after the UK leave the EU.

Research carried out by the DHRE found one-third of new homeless families in the Dublin region last year were non-Irish nationals. During Storm Emma in late February, 99 out of 177 rough sleepers who presented for emergency shelter were non-Irish.

Case Study: ‘We need a bigger place for my mum’

Jacqueline Bessong is a single mother living in a two-bed home in Naas, Co Kildare, with her three children and elderly mother.

Originally from Cameroon, Jacqueline sought asylum in Ireland in 2008, and was granted status to remain in the country in 2015. Last September she brought her 80-year old mother to Ireland under a family reunification scheme.

Since then her mother has been sleeping in a bed placed in the sitting room of the home, which Jacqueline rents from a landlord, part funded by the Housing Assistance Payment (Hap) scheme.

After she left direct provision she struggled to find housing she could afford, and slipped into homelessness. “I’ve been in a hostel which is just a room, with all my kids in one room,” Ms Bessong told The Irish Times.

Previously Jacqueline and her three children had been living in longterm homeless accommodation on North Circular Road.

When her mother was brought to Ireland Ms Bessong went to the Dublin Region Homeless Executive to try and secure suitable accommodation for the family. “First they say we should go to B&B, and I said how can I go to B&B with my mum,” she said.

The DRHE helped her secure a two bed home in Naas, Co Kildare, on a rent subsidy scheme, where the family have lived since last September, she said.

Her two sons, aged 22 and 17 years, sleep in a bunk -bed in a small room, Jacqueline sleeps in a bedroom with her 3-year-old daughter, and her mother sleeps in a bed in the sitting room.

The house is not large enough for the family, particularly as her mother has mobility problems, Ms Bessong said.

“I’m happy where we are, but we need a bigger place for my mum. Last week she fell down because of the small environment. She doesn’t have time to rest, because the kids are looking at television, my daughter is playing, everybody want to cook,” Ms Bessong said.

After receiving refugee status Ms Bessong was employed as a care assistant, but left work shortly after her 13-year old son died tragically in 2016.

In May 2016 her son Franck drowned in the River Liffey, he had entered the water near Chapelizod, after playing a schoolboy football match. Her husband also died in Cameroon before she came to Ireland.