Contract for more than 500 social homes to be awarded 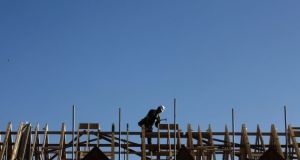 The social housing projects will be the first large-scale PPPs pursued since the collapse of the developer-led social housing system 10 years ago. Photograph: Jason Alden/Bloomberg

The contract to build more than 500 social homes on six sites across the greater Dublin area, first announced four years ago, will be awarded withing weeks, the Department of Housing has confirmed.

The homes in counties Dublin, Kildare, Wicklow and Louth will be built using public private partnerships, and will be the first large-scale social housing PPPs pursued since the collapse of the developer-led social housing system 10 years ago.

The 534 houses and apartments are the first tranche of 1,500 social homes due to be built across the State using PPPs at a cost of €300 million.

The Government’s Social Housing Strategy 2020, published in 2014, proposed returning to PPPs as an off-balance sheet mechanism to provide housing for local authority tenants. The plan was confirmed in the budget later that year.

In October 2015, then minister for environment Alan Kelly announced six locations had been chosen for the first 500 homes. Two of the sites were in Dublin city at Ayrfield on the Malahide Road and Scribblestown in north Dublin, while a third was in the South Dublin County Council are at Corkagh Grange. Sites at Dunleer in Louth, Convent Lands in Wicklow Town and Craddockstown in Naas, Co Kildare were also selected.

While the sites are in four counties, Dublin City Council was selected as the contracting authority for the other councils. City councillors approved the overall plan in April of last year, although several councillors said they could not support a return to the PPP model, given previous negative experience, while others raised concerns about building large scale council housing estates with no social mix. Developer Bernard McNamara had backed out of a PPP deal to develop five city council sites for housing in 2008, leaving council housing flat complexes derelict.

Unlike previous PPP models, where ownership of the land was transferred to the developer, the sites will stay in State ownership and the developer will be given a licence to build. The developer will get payments from the State for a 25-year period, after which the houses or apartments will return to State ownership, in what is known as an “availability-based” PPP model. The model has previously been used to build a number of roads, schools, court buildings and primary care centres.

While the previous PPP housing schemes included private homes, only social housing will be built on the six sites, with tenants allocated by the relevant local authority.

A single development consortium will build the homes across the four counties. Five groups made bids to build the homes, with three remaining in the running, these are: Torc Housing Partnership, involving, Tuath Housing Association as the tenant manager, with builders JJ Rhatigan, and equity providers Kajima Partnerships and Equitix; Comhar, involving Oaklee Housing with Sisk and Macquarie Corporate Holdings; and BAM PPP involving Circle Voluntary Housing Association and Bam Building.

A spokesman for the Department of Housing said a decision on the successful bid is expected by early September. Planning permission has already been granted for each site and construction is expected to take about 18 months.