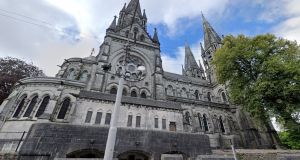 President Michael D Higgins has praised the Church of Ireland community in Cork for its work in ensuring that St Fin Barre’s Cathedral in the city has remained a place of inclusion.

He was speaking as members of the community on Monday gathered to mark the 150th anniversary of its consecration as a place of worship.

Mr Higgins sent a message to the Bishop of Cork, Cloyne and Ross, Dr Paul Colton as he and the Dean of St Fin Barre’s Very Rev Nigel Dunne gathered with a limited number of members of the Church of Ireland community to mark the event .

In the ceremony, which was live-streamed, Rev Dunne read the message from Mr Higgins who recalled the history of the Gothic Revival three spire limestone cathedral, designed by eminent Victorian architect William Burges and located on Bishop Street in a historic quarter of the city.

“The history of St Fin Barre’s is a rich and enduring one, rooted in the founding of a monastery by St Finbarr many centuries ago in Cork city. Today it is an integral part of Cork’s story and a profound connection to the very different city in which St Fin Barre’s was originally conceived and constructed.

“Like the city itself, St Fin Barre’s has evolved and changed since its early foundations in the 7th century - it has however continued to provide an enduring space of peace, comfort and worship for generations of Cork residents and the visitors that it welcomes through its doors each year.

“I thank all those who worked to ensure St Fin Barre’s Cathedral endures as a place of inclusion, solace and reassurance - I wish you well as you mark this milestone anniversary and every success as you continue to enrich the spiritual, cultural and community life of Cork city.”

The third church to be built on the site, St Fin Barre’s replaced a previous Anglican church built in the 1730s and work began on the new cathedral in 1863 with the building being consecrated by the then Bishop of Cork, Bishop John Gregg in 1870 and the limestone spires completed in 1879.

Taoiseach Micheál Martin also sent a message of congratulation, pointing out that St Fin Barre’s was one of Cork’s great architectural treasures and was a fitting testament, not only to the memory of St Finbarr, but also to the Christian tradition of prayer and reflection on the side since the 7th century.

“Many cities have landmark monuments that mark their city’s heritage and history and Cork is indeed fortunate to have a living monument to faith at its heart - this is a building that I, and thousands of fellow Corkonians, have grown up with,” said Mr Martin.

“It is a constant presence on the banks of the south channel of the Lee, adjacent to Elizabeth Fort and the ancient heart of the medieval city and it’s been a reassuring feature of the city’s landscape for generations - it is part of the DNA of our city.”

Mr Martin said that St Fin Barre’s had many notable features but one that stood out for him, especially in this decade of centenaries was the Heroes Column, bearing the names of 400 men from the Diocese of Cork, Cloyne and Ross who perished in the first World War.

“It is fitting that these men are remembered and it’s a poignant reminder of the complex history of this island which we all share,” said Mr Martin as he praised the Church of Ireland community in Cork for restoring the cathedral in such a way that it can be valued and appreciated by all.

Describing the cathedral as “an iconic building”, Lord Mayor of Cork Cllr Joe Kavanagh wished everyone associated with St Fin Barre’s Cathedral the best for the future and thanked them for “keeping alive the historic significance of St Finbarr in our wonderful city”.