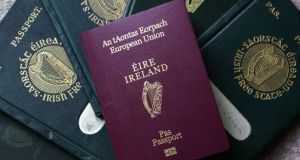 More than 5,300 people have been waiting longer than two years for their application for Irish citizenship to be processed, according to data released by the Department of Justice.

A total of 5,379 people, or more than 23 per cent of the 23,187 citizenship applications currently being processed, have been waiting over 24 months for the process to be completed.

The average wait time for an application to be processed in 2020 has been 13.5 months, according to the department. The Government’s immigration website states that a “straightforward application” for Irish citizenship should take 12 months to process.

The number of people waiting more than 24 months for their application to be processed has risen by nearly 50 per cent since May of this year when there were 3,629 people waiting for the same length of time.

It is understood a number of applicants who have been waiting over a year for their application to be processed received a letter from the department in recent weeks stating the process of ensuring applicants are of “good character” can take a “considerable period of time” and that there is “always a proportion of cases that take longer than the norm to process”.

The department told The Irish Times that the longer wait time for applications to be processed should be viewed in the context of the “significant disruption to normal processing experienced due to the High Court challenge on continuous residency in 2019” and the “ongoing staffing restrictions that have been in place since March due to Covid-19”.

It said immigration services has not suspended the receipt or processing of applications at any point during the pandemic but that process rates have been “negatively impacted” by Covid-19 restrictions.

Citizenship ceremonies were put on hold for five months last year after High Court judge Mr Justice Max Barrett ruled that any person applying for Irish citizenship could not spend a day outside Ireland in the year before applying.

Last November, the Court of Appeal overturned the ruling that applicants needed unbroken residence for an entire year in Ireland. The incident resulted in a backlog of 20,500 people by December 2019 who were waiting to be sworn in as Irish citizens by a judge.

The department noted that a “significant proportion” of applications would have been completed during 2020 were it not for the impact of Covid-19 which has meant no in-person citizenship ceremonies have taken place in the past eight months.

The last citizenship ceremonies, held in early March, saw 5,000 people from 135 countries welcomed as Irish citizens. A virtual ceremony was held in July but the minister for justice said future events of this sort would not be “feasible” because of the high demand.

Ms McEntee announced in October that citizenship ceremonies would be temporarily replaced with a requirement for citizenship applicants to sign an affidavit declaring loyalty to the State.

A spokesman for the Department of Justice said the new system is expected to become operational in early 2021 once the minister has signed a statutory instrument to the Irish Nationality and Citizenship Act 1956. Once the system is in use, around 5,000 people will be able to conclude their citizenship journey, he said.

Information on this new system will be posted on the immigration services delivery website “when appropriate” and in-person citizenship ceremonies will resume once circumstances allow, he added.