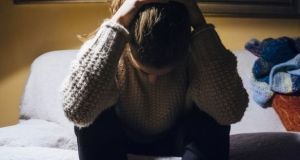 One in five women have been raped in their lifetime, compared to one in 10 men, the study found. Photograph: Getty Images

Almost 15 per cent of Irish adults have been raped at some point in their life, while one in three experienced some form of sexual violence, according to a new study.

Researchers from Trinity College Dublin and Maynooth University examined the prevalence of sexual violence in the Republic in a nationally representative sample of 1,020 people who self-reported their histories.

Participants were recruited from existing research panels and asked to partake in an unspecified survey by Irish research company Qualtrics. Sampling methods were then used to select participants so the sample was representative of the population in terms of gender, age and geographical spread.

Some 31 per cent of Irish adults experienced sexual harassment, which is unwanted sexualised comments or behaviours other than penetration.

The prevalence of sexual violence varied “significantly” between men and women, the report states, with 49 per cent of women and 19 per cent of men reported being sexually assaulted or harassed.

Of those who experienced sexual violence, some 8.5 per cent experienced the violence during childhood, 15.8 per cent during adolescence and 16.7 per cent in adulthood.

“It is women who bear the brunt of sexual violence in society. It’s the United Nations International Day for the Elimination of Violence Against Women and it is women who mostly experience this.”

“It’s easy to think in Ireland we’ve made great progress and it’s not in our backyard but it is. If you’re in college, or you’re in work, somebody sitting beside you is probably a victim of sexual violence,” he said.

The researchers believe their findings are “likely to be underestimated”, as individuals who are in institutions such as hospitals, prisons or mental health facilities were not included in the sample.

The study also examined the effect sexual violence can have on the mental health of victims, with the researchers finding those who experienced these events were more likely to suffer from a range of mental health problems.

However, “socio-ecological indicators” such as education, employment and being in a committed relationship, remained largely unaffected by the violence they endured, the researchers state.

Noeline Blackwell, chief executive of the Dublin Rape Crisis Centre, said the findings demonstrate the need for additional supports for these people.

“The way it is right now, people might have to wait 12 to 18 months for service and that is absolutely unacceptable,” she said. “When you don’t address something that has hit you in your most intimate being and is very often a breach of trust, then, like any other wound, it festers and can make it harder to heal.”