Ireland ‘at the bottom’ of investment in social housing 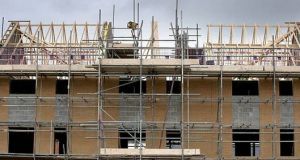 “In most of the OECD countries the social housing stock is either small or very small.” Photograph: Getty Images

The world’s wealthiest nations have halved public investment in housing development over the past 20 years, with Ireland “at the bottom of the group”, the Organisation for Economic Co-operation and Development (OECD) has told a Housing Agency conference.

The Covid-19 pandemic will increase demand for social and affordable housing over the long term, said Willem Adema, OECD senior economist. However, OECD countries were ill-equipped to meet these needs because of steep reductions in public housing construction.

The OECD represents 37 of the world’s wealthiest nations, including most European countries, North America and Australia.

Spending on “housing allowances” largely to support people living in the private rented sector had “ held up over the years”, he said “but direct spending on housing development has fallen considerably”.

While the decline had largely happened over the past two decades, it had been particularly steep since the economic crash of 2008 and 2009, and had been coupled with a lack of investment in maintaining the existing housing stock, with the result that countries had a growing number of unusable homes.

The reduction in stock also meant only the very poorest people were likely to be accommodated in publicly-owned housing.

“The Netherlands, Austria and Denmark try to get as big a group as possible in the social housing stock so you don’t concentrate all poverty in social housing, but establish a certain social mix, but that is increasingly difficult and targeting is becoming increasingly the norm,” Mr Adema said.

There was, he said, a challenge in finding “the right balance in supporting a social mix and avoiding stigmatisation of developing of ghettos, while making sure you get support to those households most in need”.

He said while it was too early to assess the full effects of the pandemic, “certain trends” were already becoming apparent.

“Infection rates in poorer areas with more social housing are considerably higher than elsewhere. The longer term effect is that the economic impact of the pandemic will increase housing insecurity among a large group of people, and that will also in future increase demand for social and affordable housing.”

This would put more pressure on governments to increase investment in housing development, he said. “The reduction in public investment in affordable and social housing after the financial crisis has to be reversed in our view.”

Sorcha Edwards, secretary general of Housing Europe, said the growth in OECD house prices had not been stemmed by the pandemic.

“We wouldn’t be so worried if housing prices were growing in line with incomes, but this is where the brunt of the problem is; incomes are not growing at the same pace as house prices, and this trend has not been slowed by Covid, and in fact it may even be becoming more extreme.”