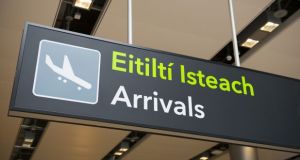 The latest CSO data also shows the number of people arriving into Ireland and departing the country dropped by around a third between September and October of this year. Photograph: iStock

Just over four million overseas passengers have travelled to and from Ireland so far in 2020, down from 17.4 million by the same point last year.

Central Statistics Office (CSO) travel data released on Monday shows 4.19 million people travelled into Ireland and 4.17 million travelled out of the country between January and October 2020, a drop of around 76 per cent on the same time last year.

The latest CSO data also shows the number of people arriving into Ireland and departing the country dropped by around a third between September and October of this year.

In October 2020, 160,900 passengers arrived into the country and 163,300 departed the country, down from 254,400 arrivals and 236,700 departures in September, indicating that many people were adhering to the Level 5 restrictions which came into effect on October 21st.

Of the 160,900 people who arrived into Ireland in October, 88.5 per cent came by air and 11.5 per cent arrived by sea with similar figures for those departing the country.

The number of passengers arriving from the United States into Ireland dropped from 92,500 in January 2020 to about 1,000 in April. Numbers from the US increased again through the summer, peaking at 10,000 in August. Some 8,600 travellers arrived from the US in September and 5,100 came in October.