Worldwide ‘the problem is not managed effectively anywhere’

Archbishop Diarmuid Martin has said that he expects Pope Francis will address "various forms of abuse" on his forthcoming visit to Ireland and that "it would be great if he met some of the victims." Video: Enda O'Dowd 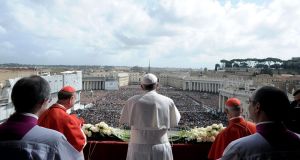 Pope Francis’s record on child protection “has been a dismal failure” and “he needs to come [to Ireland] with a mindset that it’s not good enough to simply apologise for what has happened”, the former chief executive of the Irish Catholic Church’s National Board for Safeguarding Children has said.

The problem is not being managed effectively anywhere by the church

Canon law must be reformed and outside independent monitoring introduced in the church, he added.

Mr Elliott was chief executive of the National Board for Safeguarding Children from 2007 to 2013. He has since worked on child protection with the church in Ecuador, Colombia, Peru; on cases from Chile; and with the Royal Commission in Australia, which investigated clerical child sex abuse, and with the Church of England.

“Looking at the evidence across the world the problem is not being managed effectively anywhere by the church,” he said. “I don’t believe that bishops, the clerical hierarchies, are capable of exercising the sort of judgment that is needed in order to have confidence that the vulnerable will be protected,” he told The IrishTimes.

The reason was “the problem of deference to the hierarchy from within. It’s a major problem,” he said. “Canon law is badly in need of reform. It’s archaic, it’s ineffective. The whole canonical disciplinary system is ineffective and it needs to be scrapped. There needs to be mandatory reporting,” he said.

“There needs to be independent scrutiny, independent monitoring. If it’s not going to be done by the state – a body has to be created,” he said.

His comments come a week ahead of the World Meeting of Families (WMoF) in Dublin where the issue of safeguarding was due to be discussed. It was announced on Wednesday that Cardinal Seán O’Malley, chair of the Vatican’s Commission for the Protection of Minors, will not be attending the event.

Cardinal O’Malley, who is Archbishop of Boston, was to chair a discussion on safeguarding on Friday, August 24th. A statement said his “personal attention and presence” was required in a crisis at the archdiocese’s St John’s seminary.

It follows reports of abuse allegations there and last Friday, Cardinal O’Malley asked Msgr James Moroney, rector at St John’s, to take sabbatical leave so “there can be a fully independent inquiry” into allegations.

The cardinal’s announcement came a day after the Pennsylvania grand jury reported that more than 1,000 children were molested by hundreds of Catholic priests in six dioceses there while senior church officials took steps to cover it up.

The report was critical of Cardinal Donald Wuerl, who is to take part in the WMoF next week. It faults him, a former bishop of Pittsburgh, for what it said was his part in the concealment of clerical sexual abuse.

Cardinal Wuerl is to address the WMoF next Wednesday on the theme “The welfare of the family is decisive for the future of the world”. In a statement on Tuesday he said that, while in Pittsburgh, he had “acted with diligence, with concern for the victims and to prevent future acts of abuse”.