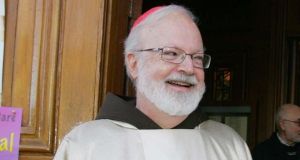 Cardinal Seán O’Malley, chair of the Vatican’s Commission for the Protection of Minors has announced he will not be attending the World Meeting of Families (WMoF) in Dublin later this month.

Archbishop of Boston Cardinal O’Malley was scheduled to chair a discussion on Safeguarding Children and Vulnerable Adults at the WMoF on Friday August 24th. The panel includes Dublin abuse survivor Marie Collins, who resigned from the Commission for the Protection of Minors last year in protest at the frustration of its work by Vatican officials.

In a short statement today, the Boston archdiocese said that “though previously scheduled to moderate a panel presentation and discussion at the World Meeting of Families, important matters pertaining to the pastoral care of St John’s Seminary in the Archdiocese of Boston and the seminarians enrolled in the formation program there require the Cardinal’s personal attention and presence”.

It follows reports of abuse allegations at the seminary.

Last Friday, Cardinal O’Malley asked Monsignor James Moroney, rector at St John’s, to take sabbatical leave so that “there can be a fully independent inquiry” into the allegations.

The statement cancelling his planned trip to Ireland said though Cardinal O’Malley would not be able to join panel members “he will closely follow the proceedings from the Archdiocese of Boston”.

The statement concluded that “the World Meeting of Families is a significant event in the life of the Church in Ireland and the occasion of Pope Francis’ first pastoral visit to that country. Cardinal O’Malley joins the universal Church in prayer for the success of this events and the Holy Father’s visit.”

Cardinal O’Malley’s announcement follow s a day after the Pennsylvania grand jury reported that over 1,000 children were molested by hundreds of Catholic priests in six Pennsylvania dioceses, while senior church officials took steps to cover it up, according to a landmark grand jury report.

The report is critical of another US Cardinal who is to take part in the World Meeting of Families next week. It faults Cardinal Donald Wuerl, the former long-time bishop of Pittsburgh who now leads the Washington archdiocese, for what it said was his part in the concealment of clergy sexual abuse.

Cardinal Wuerl is scheduled to address the WMoF next Wednesday on ‘The Welfare of the Family is Decisive for the Future of the World’. He released a statement on Tuesday that said he had “acted with diligence, with concern for the victims and to prevent future acts of abuse”.

The Pennsylvania grand jury said it believes the “real number” of abused children there might be “in the thousands” since some records were lost and victims were afraid to come forward. The report said more than 300 clergy committed the abuse over a period of decades, beginning in the mid-1950s.

Pennsylvania attorney general Josh Shapiro said the two-year investigation found a systematic cover-up by senior church officials in Pennsylvania and at the Vatican.

“The cover-up was sophisticated. And all the while, shockingly, church leadership kept records of the abuse and the cover-up. These documents, from the dioceses’ own Secret Archives, formed the backbone of this investigation,” he said.

Significantly, the report faulted Cardinal Donald Wuerl, the former long-time bishop of Pittsburgh who now leads the Washington archdiocese, for what it said was his part in the concealment of clergy sexual abuse.

The grand jury scrutinised abuse allegations in dioceses that minister to more than half the state’s €3.2 million Catholics.

Its report echoed the findings of many earlier church investigations around the country in its description of widespread sexual abuse by clergy and church officials’ concealment of it.

Most of the victims were boys but girls were abused too, the report said.

“Church officials routinely and purposefully described the abuse as horseplay and wrestling and inappropriate conduct. It was none of those things. It was child sexual abuse, including rape,” Mr Shapiro said.

O’Doherty and Waters to appeal court’s dismissal of legal action 13:13
Veteran drug trafficker linked to €700,000 cash seized by gardaí 13:11
Got a moment? Help research into life under Covid-19 restrictions 12:58
More than 1,500 scientists issue funding warning and call for department for higher education and research 12:50
Government accused of reneging on Defence Forces recruitment 10:20