After Pope John Paul II’s visit to Ireland in 1979, crowds gathered to bid on the leftovers 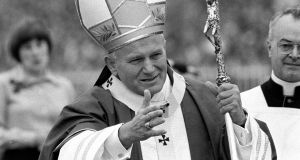 It isn’t clear why John Igoe decided 5,000 was the correct number of sandwiches to make for the pope’s visit to Knock in 1979. But he certainly overshot the mark.

“I made 5,000 sandwiches, and sold only 2,000 – no, say three, it sounds better,” the Galway man told The Irish Times after recalling the “fiasco” about a month later.

Carpet was a hot commodity. The covering for the altar in Phoenix Park had had been in the news for weeks

Out west, an enterprising Mr Igoe wasn’t the only man with his mind on sandwiches. Gerry Hughes, then head of Lydon House, was tasked with orchestrating the largest catering event ever seen in the west of Ireland at the time. That meant serving 180,000 cups of tea, 125,000 cups of coffee, 40,000 pastries, 35,000 slices of cake and 40,000 bowls of soup to hungry crowds at Ballybrit and Knock.

Punters in the west could expect to be charged 20p for tea or coffee and 50p for a sandwich. The pope, meanwhile, enjoyed a choice of broth, poached salmon, baked ham, cheese and an Irish Mist souffle.

Feeding the masses wasn’t the only concern. The Dublin events alone required mountains of equipment, including various fittings, banners, piping, benches (about 2,000), tarps, tents, chairs, signage, plywood sheeting, stakes, tables and about 800 umbrellas. The latter were specially ordered for visiting archbishops and bishops, only to go unopened in the nice weather.

When the crowds dispersed, it all had to go somewhere.

On November 13th, 1979, Mr Igoe came to the capital intending to recoup his losses, according to the report in The Irish Times by Maev Kennedy. He travelled to the white auction tent at Phoenix Park, where a bounty of papal detritus was sold at knock-down prices. He had his eye on timber and carpets, but “auction fever got him”, and he walked away with five 40ft-long banners at £20 a pop.

“I’m going to give one to my parish priest,” he reasoned, “but I don’t know what I’ll do with the other four.”

It was a freezing morning. A small electric fire kept the auctioneer, Owen Murphy, warm, but the bargain hunters had a colder time of it.

A small crowd of 150 gathered at first and swelled to several hundred by the afternoon. The punters were a jumble of “serious looking individuals” tramping around in wellies, scanning stacks of stakes and poles, as well as souvenir-hunters and people simply looking to redecorate their living rooms.

Carpet was a hot commodity. The covering for the altar in Phoenix Park had had been in the news for weeks.

“An order for 5,000sq m of plain white carpet was being discussed with Irish Ropes Ltd for its subsidiary company Curragh Carpets,” wrote future Irish Times editor Geraldine Kennedy in a report in August that year. “The carpet will cover the base of altar which will occupy one acre.”

RTÉ intervened in the early stages of the process, telling the Dublin Diocesan Committee it could not be pure white, and should be blue or grey. Black and white television would not handle white, it warned.

Curragh Carpets, owing to the size of the £20,000 order, was forced to turn North for the yarn to complete it. “It now seems likely that the Pope may walk on something from Northern Ireland,” wrote Kennedy, “even if he doesn’t cross the Border.” It would perhaps come from the Rev Ian Paisley’s home county, she noted.

In Phoenix Park in November, the shredded remnants of the same carpet were billed in headlines as the pope’s footprints. A more authentic memento, perhaps, than the LP of RTÉ’s papal broadcasts, which came out impressively soon after the visit. It quickly went platinum, selling 50,000 copies in Ireland by October 25th.

“The red carpet, that’s the real thing, that’s what he actually stood on,” said one woman in the crowd, Mrs Keogh, who was prepared to go to £100 for a banner. She bagged one for £30, only to see the price drop to £15.

Des Kelly, who fitted the carpet, was there to buy it back in large quantities at £1 a yard – to sell it again. Edward and John Fossett, of circus fame, were in the market for timber for winter repairs, while a minibus operator named Tony Curran wanted carpets, too. “I’m going to make an overcoat with ‘the pope walked on this’ printed on the back,” Mr Curran said, before adding “no really, it’s for the living room”.

The estimated take on the day was £50,000, while a similar set-up in the west was expected to bring in more than £20,000. There, another report said, auctioneer Danno Heaslip oversaw bidding on 1,200 lots in one marathon sitting.

“In disposing of the appurtenances, the auctioneer, Mr Danno Heaslip, talked for five hours, with only a 15-minute break for coffee, thus surpassing the Pope, who went on for three hours at Ballybrit, although without any coffee break,” the report noted.