Bishops’ commitment to child protection ‘a lot of lip service’ 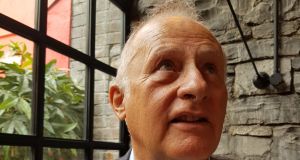 Ian Elliott, safeguarding consultant and first chief executive of the National Board for Safeguarding Children in the Catholic Church in Ireland.

The man who created child protection structures for the Catholic Church in Ireland would not do so again because of the resistance he encountered from bishops. “If I was faced with the prospect again and knowing what I know now, would I go down that route again? The answer is no. Very definitely not, ” Ian Elliott told The Irish Times.

Before his appointment as first chief executive of the Catholic Church’s National Board for Safeguarding Children in 2007, Mr Elliott had been director of the National Society for the Prevention of Cruelty to Children in Belfast and was on secondment to the Department of Social Services in Northern Ireland where he led major reforms in child protection services. A Presbyterian from Dublin, he attended St Andrew’s College before going to study at Trinity College.

Up to 2013, when his contract was not renewed by the Irish Catholic Church, he oversaw reviews of child-protection in 16 of the 26 Catholic dioceses on the island and four religious congregations.

Looking back his view of the Irish Catholic Church’s commitment to child protection is that it was “a lot of lip service”. There was “very limited commitment”. His work was resisted by bishops particularly at the beginning when “they were very resistant”, he said.

For instance, he now believes he was not handed over all files for Dromore diocese when he conducted a review of child protection there in June 2011.

It has been reported that the diocese of Dromore denies Mr Elliott’s claim. It said he received full diocesan files from John McAreavey. “The diocese gave Mr Elliott access to all available records and the review made reference to those files and acknowledged the work of Bishop McAreavey in the field of safeguarding.”

Dromore has caused Mr Elliott to doubt that he was handed over all relevant files for the other 15 dioceses whose child protection standards he also reviewed. “I’m not confident. I have to say that. There are some that I don’t believe they’re accurate,” he said. Even so “there were some pretty horrendous situations. It was just not good,” he said.

Since his work with the Irish Catholic Church ended in 2013 he has been working on child protection with the Church of England and with the Catholic Church in Ecuador, Colombia, Peru, as well as on two cases from Chile. He also submitted a paper to the Royal Commission in Australia which looked at clerical abuse there.” I was recommended to do that,” he said.

Reflecting on his experience with the Irish Catholic Church, five years on, he said “it was incredibly challenging. At the end of the six years I left a lot wiser but I was exhausted, emotionally, every way. I met with a lot of hostility, sometimes it wasn’t even in anyway hidden, completely hostile. I chose to be there, I chose to stay.”

Just one Irish bishop stood out. “Without a shadow of a doubt that would be Archbishop Diarmuid Martin, because he had the courage of his convictions. He was prepared to be unpopular, he was prepared to say ‘this is not right, it should not be happening’, and he was a very strong person and I admired him.

“We’d have rows, we wouldn’t always be on the same page but I respected him because I always felt he had the best interests of children and young people at heart and that he could not in his conscience come to terms with the fact that any member of the clergy could abuse a young person.

“He was outstanding, he was the person that you could say ‘yeah, he may not be easy to work with or easy to talk to but he would be prepared to hear what you had to say’. I got the impression that there were others who weren’t even prepared to think about the situation, and people who were adamantly opposed,” he said.

But “it certainly was a factor in relation to engaging with the dioceses or religious in Northern Ireland – negatively”, he said.