Journalists, as ‘protectors of news’, must be truthful and opposed to falsehoods 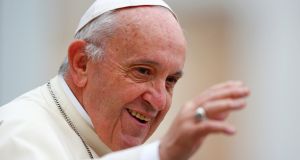 He described as praiseworthy “those institutional and legal initiatives aimed at developing regulations for curbing the phenomenon.” Photograph: Reuters

Pope Francis has compared those who spread ‘fake news’ to the serpent in the Garden of Eden. It was also why Cain murdered Abel and “the countless other evils committed against God, neighbour, society and creation,” he said.

“The strategy of this skilled ‘Father of Lies’ is precisely mimicry, that sly and dangerous form of seduction that worms its way into the heart with false and alluring arguments,” he said.

In his message for World Communications Day, (which falls on May 13th next) he described ‘fake news’ as “the spreading of disinformation online or in the traditional media.”

It was “false information based on non-existent or distorted data meant to deceive and manipulate the reader. Spreading fake news can serve to advance specific goals, influence political decisions, and serve economic interests.”

Its effectiveness lay in “its ability to mimic real news, to seem plausible,” he said, and how it “grasps people’s attention by appealing to stereotypes and common social prejudices, and exploiting instantaneous emotions like anxiety, contempt, anger and frustration.”

He described as praiseworthy “those institutional and legal initiatives aimed at developing regulations for curbing the phenomenon.”

In the context he said “a weighty responsibility rests on the shoulders of those whose job is to provide information, namely, journalists, the protectors of news.”

In today’s world “theirs is, in every sense, not just a job; it is a mission. Amid feeding frenzies and the mad rush for a scoop, they must remember that the heart of information is not the speed with which it is reported or its audience impact, but persons.

“Informing others means forming others; it means being in touch with people’s lives. That is why ensuring the accuracy of sources and protecting communication are real means of promoting goodness, generating trust, and opening the way to communion and peace.”

What he was speaking of, he said, “a journalism that is truthful and opposed to falsehoods, rhetorical slogans, and sensational headlines. A journalism created by people for people, one that is at the service of all, especially those – and they are the majority in our world – who have no voice.

“A journalism less concentrated on breaking news than on exploring the underlying causes of conflicts, in order to promote deeper understanding and contribute to their resolution by setting in place virtuous processes. A journalism committed to pointing out alternatives to the escalation of shouting matches and verbal violence.”