Down syndrome group calls for respect during abortion referendum

‘People with Down syndrome listen to the news and read media articles, including social media content’ 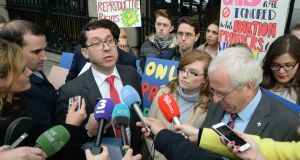 Down Syndrome Ireland called for an end to “exploiting children and adults with Down syndrome to promote campaign views”.

All sides in the abortion referendum debate must “stop exploiting children and adults with Down syndrome” the main representative group for people and families affected by the disability warns.

The use of images of children with Down syndrome, by the anti-abortion Love Both campaign, was highlighted by Irish Times columnist Fintan O’Toole this week.

He referred to campaign material being distributed to homes by Love Both, which states: “Ninety per cent of babies diagnosed with Down Syndrome in Britain are aborted” and uses an image of a girl, aged less than 10, who has Down syndrome.

O’Toole said that while it was true 90 per cent of pregnancies diagnosed with Downs syndrome were terminated, up to 40 per cent of pregnant women in Britain were not screened for it, and that in the Netherlands, where screening was widely available, the number of babies born with Down syndrome had remained steady.

Down Syndrome Ireland (DSI) said the use of the image by Love Both had “come on top of a number of references” in the media recently in which campaigners had referred to people with Down syndrome to present their views.

“This is very disrespectful to both children and adults with Down syndrome and their families. It is also causing a lot of stress to parents. People with Down syndrome should not be used as an argument for either side of this debate.”

“Down syndrome Ireland believes that it is up to each individual to make their own decision about which way to vote in the upcoming referendum.

“We are respectfully asking both sides of the campaign debate, all political parties and any other interested groups to stop exploiting children and adults with Down syndrome to promote their campaign views.

“We would also like to remind campaigners on both sides of the debate that people with Down syndrome listen to the news and read media articles, including social media content. We ask that the tone of the debate is respectful towards all people with disabilities.”

Among others who have argued a large number of terminations could follow pre-natal Down syndrome diagnoses if abortion was available here have been Independent senator Ronan Mullen and Fianna Fail TD, Jim O’Callaghan.

Senator Mullen has said: “We have a tradition here in Ireland where children with Down syndrome are perhaps more cherished than in many other countries.”

Mr O’Callaghan told the Irish Examiner last week: “I do not support the proposal for abortion up to 12 weeks as I am concerned it would significantly increase the number of pregnancies with Down syndrome or other disabilities that are terminated.”

Mr O’Callaghan, asked on Wednesday about the DSI statement, said he did not wish to comment further on the issue.

Love Both also declined to comment but referenced comments on its Facebook page about campaigning on the high proportion of terminations following pre-natal, Down syndrome diagnoses in other jurisdictions.

Ailbhe Smith, convenor of the Campaign to Repeal the Eighth, said she “absolutely” agreed with DSI’s concerns about references to Downs syndrome in the debate.

“The Coalition to Repeal the Eighth has never, and as far as I know none of our over 100 affiliate organisations, would ever use an image of a child or a person with disabilities in such a cynical way. It is emotional blackmail.”

At the time of writing neither Senator Mullen, Mr O’Callaghan nor Love Both had returned calls or contacts from The Irish Times.