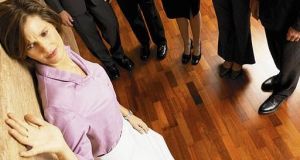 “Severe bullying” is more likely to be experienced by women, by staff of all genders in organisations with more than 250 staff, and by those in the 25-to-34 age group. Photograph: Getty Images

Employees of Asian descent are seven times more likely to experience violence at work in Ireland than white colleagues, a new survey on workplace behaviour has found.

The study also found public sector staff are five times more likely to experience violence than those working in other sectors.

“Severe bullying” is more likely to be experienced by women, by staff of all genders in organisations with more than 250 staff, and by those in the 25-to-34 age group, says the study by three universities for the British Institution of Occupational Safety and Health.

Employees in the 35 to 44 age group are at greatest risk of experiencing violence, as are those with higher levels of educational attainment, the study led by NUI Galway, University of Limerick and Plymouth University notes.

Overall, more than 40 per cent of people say they have experienced a form of ill-treatment at work, while one in 12 have experienced and/or witnessed physical violence. This is in spite of most organisations having policies in place to prevent it, the authors note.

Some 1,500 people were interviewed in their homes for the survey, and 21 different types of behaviour – ranging from physical violence to unreasonable management, incivility and disrespect – were used by the researchers in the interviews.

The research found a correlation between ethnicity and ill treatment, with workers of black, mixed or Asian ethnicity recording the highest levels of experiencing and/or witnessing violence.

It found Asian workers are seven times more likely to experience violence at work than white workers, and that ill-treatment of black and Asian workers is usually perpetrated by individuals of the same ethnicity.

It noted a “curious” regional effect, with workers in Connacht and Ulster almost four times more likely to experience violence and injury compared to those in Dublin, and ill-treatment being more prevalent in all of the regions outside the capital.

Some employees said they believed reporting an issue would not help and could even worsen their situation, noting that middle managers were “either unable or unwilling to act on complaints, or that policies were too complicated”, the report states.

Some 6 per cent of participants reported having experienced physical violence, while 5 per cent said they had witnessed it and 0.5 per cent had carried it out. The study found a sub-sample of female victims of severe bullying said the perpetrators tended to be other women.

Lead researcher Dr Margaret Hodgins of NUI Galway’s health promotion research centre noted that while the Health and Safety Authority had previously conducted research into bullying in Ireland, this survey went much further in examining the prevalence of “unreasonable management, incivility or disrespect and violence and aggression”.