Homelessness decrease was ‘seasonal’ and will likely reverse, charities warn 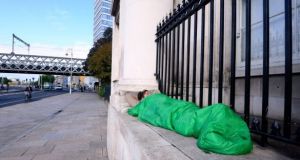 The decrease in family homelessness last month was ‘seasonal’ and will likely be reversed next month, homelessness charities have warned. Photograph: Cyril Byrne/The Irish Times

The decrease in family homelessness last month was “seasonal” and will likely be reversed next month, homelessness charities have warned.

“Significantly fewer children were in emergency arrangements during December compared to the previous month. Obviously we still have more work to do to help children and families into secure homes, but this is good progress for those families who were accommodated during the month of December.”

Commentators however said “history” indicated a fall in the December and January figures has, since the housing crisis began in mid-2014, been followed by sharp increases between January and February, and further steady increases through the rest of the year, to November.

In July 2014, when the Department began publishing monthly homelessness figures in their current format there were 749 children in 344 families in emergency accommodation.

By November 2014 there were 887children in 396 families. Numbers fell through the following months to 865 children in 401 families in January 2015, but began climbing again by February that year, to 938 children in 429 families.

Roughan McNamara, advocacy manager with Focus Ireland, welcomed the fall in homelessness in December, but added: “Sadly we expect the figures to be rising again. We don’t want to be negative but it’s important we don’t take the pressure off.”

He called for deadlines on how long families would be in homelessness.

Niamh Randall, national spokeswoman for the Simon Communities, said homelessness figures decreased in December as some people were able to stay with family over Christmas and landlords put off evictions until January.

“They then tend to jump up again in January and February. The fall in December is a seasonal variation. We would love to be optimistic but history shows us, the arrangements some people come to exit homelessness at this time of year are not sustainable.”

She called for greater protections for tenants in the private rented sector, rent-certainty measures and an increase in the “pace of delivery of social and affordable housing”.