Bishop Liam McDaid had retired in October 2016 on health grounds 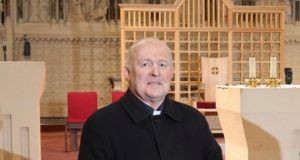 Monsignor Laurence Duffy has been appointed the new Bishop of Clogher.

He will take over from Bishop Liam MacDaid, who retired after six years in the role in October 2016 on health grounds. Monsignor Joseph McGuinness had been acting as Diocesan Administrator in the interim.

Archbishop of Armagh Eamon Martin welcomed the announcement, saying Monsignor Duffy will bring a “wealth of pastoral experience” to the role from his ministerial roles north and south of the border.

“I personally look forward to working very closely with him at a local level,” Archbishop Martin said.

“I have no doubt that Bishop-elect Larry will also bring his keen sense of pastoral priorities to bear on our discussions at the Bishops’ Conference, including the benefit of experience and wider perspective gained during his missionary placement in Kenya.”

The Roman Catholic Diocese of Clogher encompasses all of Co Monaghan, most of Fermanagh and portions of Tyrone, Donegal, Louth and Cavan. It has a Catholic population of 88,000, across 37 parishes, which are served by 58 priests and two deacons. There are 85 churches in the diocese.