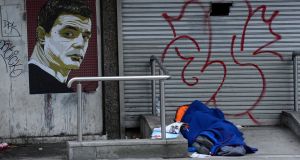 Social Justice Ireland says the crises facing countless families around the country at a time when there is enough money to tackle huge problems is “unacceptable and unnecessary”. Photograph: Cyril Byrne

The Government’s “mistaken belief” that economic growth will simply trickle down to everyone is to blame for the hundreds of thousands of people being left languishing on hospital and housing waiting lists, a think tank has said.

Social Justice Ireland says the crises facing countless families around the country at a time when there is enough money to tackle huge problems in society is both “unacceptable and unnecessary”.

“Despite being one of the richest countries in the world, with one of the fastest-growing economies, Ireland today has 780,000 people living in poverty. A quarter of a million of these are children, and over 100,000 of them have a job,” said Dr Seán Healy, director of the organisation.

“The mistaken belief that economic growth will trickle down to benefit everyone in a fair and just manner has led to successive governments implementing policies that give priority to economic growth over all other areas,” said Dr Healy.

He was speaking in advance of the launch of the think tank’s latest state-of-the-nation Social Monitor, which it publishes three times a year.

The report states that although the Government has increased spending on infrastructure and social services in recent years, it is reacting to the symptoms of critical problems such as health and housing but ignoring the causes.

Despite the rising need for social housing for example, the number being built is “grossly inadequate” because government policy relies on private landlords to provide homes rather than the State.

This prioritises “those with property portfolios over those without homes”, the report says.

Shortcomings were compounded in the latest budget, with mortgage interest relief being awarded to “corporate landlords” while the Government fails to protect tenants from spiralling rents and cramped conditions, it adds.

While spending has increased on healthcare, the “two-tiered health system” remains “beset by challenges”, with almost half a million people on hospital waiting lists, the report points out.

Instead of building a health system prepared for the future, the Government has chosen to run it on “crisis mode, putting vulnerable lives at risk”, it says.

Social Justice Ireland also points to problems in education, with Ireland suffering some of the highest depression rates in Europe among the less well-educated, and a failure to connect more than half a million homes and businesses around the country to broadband, disadvantaging rural communities in a digital age.

“It is time to truly grasp the nettle of climate change before the country is financially and environmentally bankrupted by its owns inertia,” the report states.

“While many of those policies have been very successful at generating economic growth, they have not succeeded in having those resources transformed into the levels of service and infrastructure, of equality and inclusion, that most Irish people would support or desire.

“Economic growth alone is not enough. More is required if we are to have a society which addresses the basic needs and promotes the basic rights of its population.”