Only two centres still open in Dublin, while there are six in Cork and six in Kerry 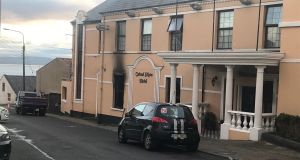 The site of the planned direct provision centre in Moville was recently severely damaged in an arson attack. Photograph: Aoife Moore/PA Wire

Five of the 38 direct provision centres dotted around Ireland are oversubscribed with residents, while the majority of other centres are close to capacity, the latest figures from the Department of Justice show.

A total of 5,928 women, men and children were living in direct provision centres around the country by the end of last week. There is a capacity of 6,209 people in centres, although some spaces are unavailable “due to family configurations”, according to the Department of Justice.

A spokesman for the department said temporary accommodation was also being used to house asylum seekers who have recently arrive in the country. A total of 202 people are staying in these commercial hotels in the east of the country, which have been used to meet the rise in demand for housing until a number of new centres can open in the coming weeks. The department spokesman said there was “no contracted capacity” in these emergency centres and the beds were being drawn down “as required”.

The Reception and Integration Agency said earlier this month it was preparing to open three new direct provision centres in Donegal, Wicklow and on the Leitrim/Roscommon border to meet the “immediate and urgent increase in demand from persons seeking international protection in Ireland”.

The Department of Justice has been criticised for plans to open centres in some of the most isolated parts of the country, including the village of Moville on the Inishowen peninsula in Co Donegal. The site of the planned centre in Moville was recently severely damaged in an arson attack.

Two accommodation centres in Dublin have closed in the past year – Georgian Court in February and Watergate House on Usher’s Quay.

The Clondalkin Towers Hotel was also set to close but the contract to run the centre was recently extended to next summer. Once this closes there will be only two direct provision centre in the capital, one in Dublin 2 and another in Finglas.

Asked if the department had been motivated to move centres out of the capital for cost reasons, a spokesman said no hotels or premises in Dublin had responded to a call for expressions of interest in January and September. The hotels in Lisdoonvarna, Moville and other places responded to the call, he said.