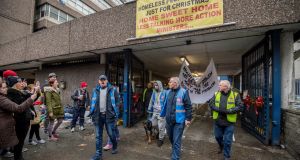 The conversion of Apollo House into a “€50 million cash cow” while the homelessness crisis continues is “upsetting”, according to campaigners involved in the occupation of the former office building two years ago.

The 0.72-acre site of the former Apollo House near Tara Street station in Dublin city centre has been sold to Pat Crean & Partners for more than €50 million.

The building, which was occupied by groups protesting about the homelessness crisis and had previously been leased by the Department of Social Protection, was demolished several months ago.

Brendan Ogle, senior officer with the trade union Unite, said the occupation had been about “shining a light” on the problem of homelessness.

“Clearly Apollo House was never a housing building and was never intended to be,” he said. “But it was a State asset and it was about trying to force the Government to use the assets at its disposal in the interests of its most vulnerable citizens.”

He said the Government had since “used the housing emergency in the interests of the property and landlord class” and that there had been “no ideological rethink” in order to solve the problem.

Mr Ogle said the money paid for the site could build “about 300” social houses.

Dean Scurry, who organised the Home Sweet Home group’s occupation of Apollo House in December 2016, said his first objective had been to ensure “nobody would die” that month. He said 27 people had died on the streets since then, excluding people who had died in hostels, and the number of homeless people had “probably trebled”.

Official figures published by Minister for Housing Eoghan Murphy last week show there were 5,999 adults, 1,709 families and 3,725 dependents and children in State-funded emergency accommodation in October.

Meanwhile, campaigner Fr Peter McVerry has compared homelessness to a “runaway train with no brakes”.

Writing in the Peter McVerry Trust annual report for 2017, he accused the Government of trying to change the narrative in relation to homelessness by claiming the problem was not especially bad in Ireland.

“It is difficult to be optimistic but we are committed to doing everything we can to reduce homelessness and provide permanent, lifelong housing for as many homeless people as our resources allow,” he wrote.

The report coincided with the launch of 13 new social housing units in Castle Court in Dublin city centre which were delivered by the trust in partnership with the Housing Agency and Dublin City Council.

The report revealed the charity increased its housing stock by 17 per cent in 2017 and worked with 4,971 people, the highest in its 34-year history.

It also stressed that Fr McVerry, who founded the charity in 1983, had received “no salary, expenses or allowances” from the trust in his time with it.