‘Someone like Me’ school competition is aimed at promoting disability awareness 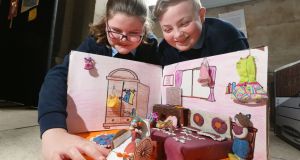 Megan Conneely and Cian Colgan from The Downs National School, Mullingar were part of a group entry of fifth and sixth class pupils announced as overall winner of the ‘Someone Like Me’ national art competition. Photograph: Finbarr O’Rourke

Other than living in a three-room diorama, plasticine doll Sophie is just like any other primary school student her age.

She goes to school, dances to music, loves shoes and enjoys making new friends on the basketball court.

Sophie happens to use a wheelchair but Catherine Staunton and fellow students at The Downs National School in Co Westmeath hope people see beyond this fact.

“It’s all about a girl wanting to be accepted for who she is,” said Catherine who with fifth and sixth year students created a 600-frame stop-motion video about Sophie for the “Someone like Me” national primary school art competition.

Now in its third year, the art competition is supported by the National Disability Authority (NDA) with the aim of promoting disability awareness among primary school children. In addition to giving students a greater understanding of what unites children of differing abilities, the competition offers a range of prizes up to the value of €750.

The animation of a day in Sophie’s life took first prize at the competition’s awards ceremony in Dublin’s City Hall on Wednesday, where a shortlist of 45 pieces (of more than 2,400 entries throughout Ireland) ranging from posters and collages to large sculptural installations were also on display.

Maeve Allen (11), a fifth-class student from Ballinderry National School in Galway, chose to honour her little brother Liam (8) - who has Down syndrome and autism - with her piece: “How I see my Brother”.

Her artwork highlights the siblings’ strong bond through a three-dimensional portrait of Liam made out of play dough which is surrounded by words and phrases - trust, love, caring, breaking things, noise - that define their relationship.

“I think this competition is very good because there are a few people in our school that have disabilities,” Maeve said. “Our school is very aware of everybody that is different and we are not scared of people with disabilities.”

Speaking at the ceremony, NDA chairperson Helen Guinan commended the breadth of talent represented at this year’s competition, and noted the importance of creating lasting positive attitudes toward disabilities at the primary school level.

“The NDA has commissioned four national surveys on public attitudes to disability since 2001,” Ms Guinan said.

“The evidence from each survey suggests that the earlier that positive attitudes towards disability and mental health are introduced, the greater the opportunities are to promote inclusive education and to improve outcomes for persons with disabilities as they grow older.”