Online visa registration system to be replaced in 2019, says department 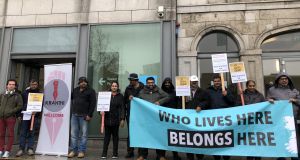 The online booking system used by immigrants to secure appointments for re-entry visas at the Irish Naturalisation and Immigration Service (INIS) on Burgh Quay is set to be replaced in the new year, the Department of Justice has said.

A spokesman for the department confirmed that the current online system, which was widely criticised after it emerged that opportunist internet operators were block-booking appointments to sell to foreign nationals at a profit, would be replaced in 2019 following a tender process.

The decision to change the website follows months of stress and frustration for foreign nationals who have been unable to secure appointments through the INIS system which was launched in 2016 to alleviate long overnight queues outside the immigration office on Burgh Quay in Dublin. The website allowed applicants to sign up, free of charge, six weeks in advance of the appointment. In September, The Irish Times revealed that internet “bot” programmes were being used by opportunists to block-book appointments which were then sold through Facebook and phone apps to immigrants for up to €60.

The department said software fixes introduced in mid-September to prevent any abuses of the system have been “successful to date in preventing the block-booking of appointments by third party agents for later resale”, but said the INIS was aware that there were still a number of agents providing “booking services in return for payment”.

The department has advised customers not to provide personal information to these agents who, it said, have “no authorisation to act on behalf of the INIS”.

Varghese Joy, a HSE nurse who has lived in Ireland since 2007, was one of a group of protesters to gather outside the INIS office on Wednesday calling for changes to the visa registration system. The group representing the Kranthi Indian Cultural Organisation delivered a letter to the office which called for a “fair and transparent” visa system; the appointment of more staff to deal with the backlog; the decentralisation of visa registrations to more Garda stations across the capital to alleviate the burden on the central INIS office and to reduce the cost of visa renewals. The annual registration fee doubled in price in 2012 from €150 to €300.

“We are demanding fairer and open access to appointments and the elimination of third parties from this process,” Mr Joy said, adding that many immigrants struggled to pay the annual €300 fee. “The price has doubled but the standard of service has diminished. Rent is so high in this country, insurance costs are high, this is all adding to the burden.”

John Chacko, a web developer who has lived in Ireland for 12 years, says the current online system has clear loopholes which are open to abuse. “Initially I thought somebody was hacking into the system but these are loopholes that people are using to make money and run a business. We are already paying €300 for renewal but we are not getting a proper service for that money.”

Asked if the INIS would consider lowering the price of the visa, the department spokesman said there were currently no plans to review the fee. He said new staff assigned to the Burgh Quay office in September had enabled the office to deal with more evening and weekend appointments but that the INIS was currently considering a number of proposals to “reduce demand for appointments” at Burgh Quay.